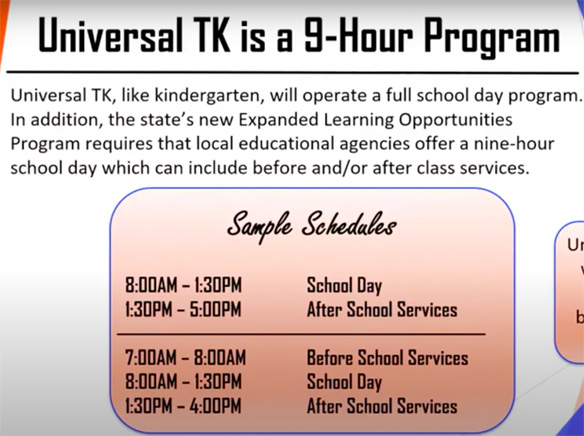 If you have a child younger than four years old, get ready for a major change in public education. Starting next school year, California’s Universal Transitional Kindergarten (UTK) program will begin its roll out. The end goal is to create an optional grade level that precedes kindergarten.

In a few years, all four-year-olds in California will be able to enroll in UTK. But that’s not all. School districts will also offer UTK students a full day of learning opportunities.

“UTK is going to be a specific curriculum for four-year-olds that really will be more of a steppingstone between preschool and kindergarten. It also will be a nine-hour day that will include before and after school care at no charge to families,” Los Alamitos Unified School District Deputy Superintendent Ondrea Reed told families at Kindergarten Information Night last month.

Universal TK, like kindergarten, is optional. The deadline for residents of the Los Alamitos Unified School District to enroll in UTK and kindergarten for the 2022-23 year ended the first week of February. The district has nine schools located across Seal Beach, Los Alamitos and Rossmoor.

At the Jan. 25 Los Al USD Board of Education regular meeting and during Kindergarten Information Night on Jan. 27, Reed explained what UTK could look like at the district’s six elementary schools.

“Our current transitional kindergarten program next school year is going to be reimagined to Universal Transitional Kindergarten,” Reed said. She noted details for the district’s UTK program are still being determined as a district committee works on schedules and curriculum.

Here are the most significant changes families can expect, according to Reed.

The state is widening the age window for enrollment in UTK in phases. Starting with the 2022-23 school year, kids who turn five on or between Sept. 2 and Feb. 2 will be able to enroll in UTK. The next school year, the cutoff expands to April 2, and then to June 2 in 2024-25.

Right now, TK has a teacher to student ratio of 1:24. But for UTK, that will be reduced to 1:12, and in the future it could be as low as 1 teacher to 10 students, according to Reed.

The UTK program is going to expand what campuses offer to their youngest students.

The exact schedule is still being discussed, but Reed said UTK pupils will likely have a traditional school day that’s similar to kindergarten starting around 8:00am and ending at 1:30pm.

Additional services could be offered before the school day starts as well as after school. Children are not required to participate in the extended services.

At the Jan. 25 meeting, Board member Megan Cutuli asked if naps would be a part of the day and Reed said that rest or nap time is not currently part of the schedule.

The UTK curriculum will merge the current TK program with preschool emergent curriculum. Reed said it would be a blend of the California Preschool Learning Foundations and kindergarten Common Core standards.

UTK will have a more play-based focus similar to preschool and the classroom will be designed to support that.

“The TK classroom environment should be engaging, promote movement and be responsive to the diverse backgrounds and experiences of transitional kindergarteners,” Reed said, adding there will be many activity centers and outside playtime.

Starting in 2023-24, UTK teachers will need to have a multiple-subject teaching credential plus 24 units of Early Childhood Education or Child Development or equivalent professional experience or a Child Development Permit.

How will UTK be paid for?

UTK will be paid for through state funding based on average daily attendance of students. The state is also offering money to help districts implement UTK. Los Alamitos USD received $176,541 to help pay for the transition, according to Reed. In addition, the California Department of Education will offer $100 million in grants to help districts meet increased staffing needs. And there’s also $490 million for districts to apply for grants to construct new facilities or retrofit existing ones.

Reed said that families can expect more information in the spring as the district continues to plan for this transformation into UTK.

For more local education news, sign up for the Spotlight Schools weekly email newsletter at SpotlightSchools.com.