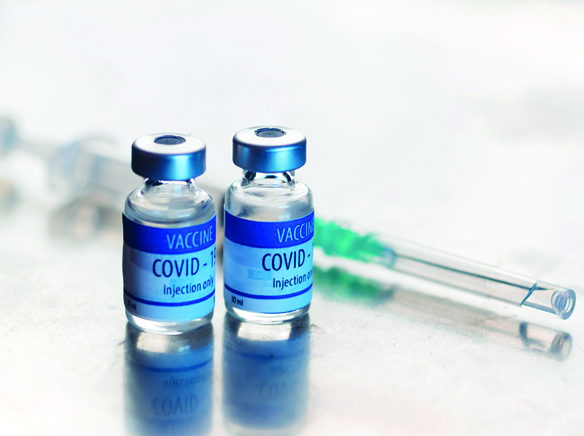 That’s what the Los Alamitos Unified School District Board of Education said it needs before it can decide on the message it wants to send to California lawmakers regarding Gov. Gavin Newsom’s proposed Covid-19 vaccine mandate for students attending K-12 schools.

“I don’t know how you feel,” trustee Scott Fayette said during the board’s Dec. 14 meeting where a resolution responding to the mandate was up for discussion. “I’m looking for the parents and the experts in our community to give me some guidance, give me some information so that I can determine what is the best course of action.”

“I need to hear more, I need to learn more,” trustee Chris Forehan said after acknowledging that both opponents to and supporters of the vaccine mandate had reached out to him. Other trustees said that they had also heard from people on opposite sides of the debate and wanted to hear more.

“I’m going on feelings. I would really appreciate data, statistics, studies,” trustee Marlys Davidson said. She expressed support for the vaccine for older students but was concerned with the idea of telling the parent of a 5-year-old that their child had to be vaccinated against COVID-19 to attend public school.

“We have to consider … what the state is ordering us to do in terms of parental rights on both sides. Parental rights for the kids whose parents are fearful of getting COVID from an unvaccinated person, and then an unvaccinated child’s … parents’ rights in that situation,” Davidson said. “There are no easy answers,” she added.

To allow for more feedback, the board decided to table the resolution so it can be discussed again at their Jan. 11, 2022 meeting.

Diana Hill, who was elected Board President for 2022 by fellow trustees, had asked for the resolution to be put on an agenda during the Nov. 9 meeting. Having it on the agenda allows for trustees and the public to discuss it at a meeting.

Parents have talked about the mandate during public comment at board meetings since it was announced Oct. 1 by Gov. Newsom. Opponents to the mandate have also held protests outside district headquarters.

Under the mandate, in order to attend in-person classes, eligible students would be required to be vaccinated against COVID-19. But it would not take effect until after the shots gained full approval from the U.S. Food and Drug Administration for their age group.

Only the Pfizer-BioNTech vaccine has full F.D.A approval for people 16 and older. The state estimates the mandate would apply to students in 7th-12th grades as early as next school year.

In a statement issued last month, the American Academy of Pediatrics said vaccines were safe and recommended “COVID-19 vaccination for all children and adolescents 5 years of age and older who do not have contraindications using a COVID-19 vaccine authorized for use for their age.”

What does the board’s resolution say?

The exemptions are the focus of the board’s current resolution, which was listed as item 14.a. on the agenda for the Dec. 14 meeting. The resolution “strongly urges” the state, its elected officials and regulatory agencies to keep the vaccine mandate exemptions in place for students and employees.

It stops short of asking the Governor to rescind the mandate, as some other local school boards, including Capistrano Unified, have done.

Adopted or not, the resolution is largely symbolic. It would not change any rules or the requirement that local school boards follow state mandates.

During public comment before the resolution was considered at the Dec. 14 meeting, a total of seven speakers spoke. All of them were opposed to the mandate and many were people who have been speaking at meetings on the issue for weeks.

One new speaker was a student who shared her experience. “This mandate is causing breakups in friendships, divisions in groups and our school is divided between who’s vaccinated and who’s not,” she said. “There’s no point to be divided. It’s sad. I want to go to school. It sucks,” she said before nearly crying.

“We have time. This isn’t happening right away,” Fayette said, noting the holidays are busy for families, the mandate won’t take effect until next fall at the earliest and state lawmakers are not reconvening until next month.

Trustees Megan Cutuli and Davidson also brought up the logistical challenges of the mandate if unvaccinated students are not allowed on campuses.

“What do we do with the children whose parents don’t want them vaccinated? We don’t have LosAl@Home set up, we don’t have the teachers for it,” Cutuli said. LosAl@Home was the all-virtual learning option offered to families during the 2020-21 school year.

Los Al USD Supt. Dr. Andrew Pulver echoed the concerns later in the meeting. “If this was to kick students out, what other viable plan is present,” he asked. “And I haven’t seen the legislature or the governor really mention anything along those lines.”

Before deciding to continue the discussion to the next meeting, President Hill said that the resolution represents a chance for the community to make a statement regarding the mandate.

The public can contact board trustees through their email addresses which are listed on the district’s website at www.losal.org/board-of-education.

For more local education news, sign up for the Spotlight Schools weekly email newsletter at SpotlightSchools.com.