The Shops at Rossmoor has the opportunity to add an LA Fitness health club to the center.  The proposed 37,000 square foot state-of-the-art health club will include an aerobics room, cycling room, indoor heated lap pool with spa, free weights and so much more.  Additionally, it will offer great fitness classes like the popular AquaFit.

We have reached out to the community on a number of occasions and through a variety of communications platforms, to hear their concerns.

After listening carefully, the proposed project implements measures to address their issues:

• The proposed LA Fitness and its customer parking will be in a currently underutilized parking lot.

Even with LA Fitness, the shopping center will exceed the city standard for parking by more than 300 spaces.

• A number of much-needed, project-adjacent, safe-street improvements will be implemented with the construction of this project.

• Existing traffic deficiencies will be fixed, including lengthening the northbound left-turn pocket at the intersection of Seal Beach Boulevard and Rossmoor Center Way, to help eliminate an existing bottleneck – and we will pay 100 percent of the cost.

• While not required by the traffic study, the project will add – at our expense – a second inbound lane along Rossmoor Center Way, creating a new through lane to the Rossmoor community, reducing the backup on Rossmoor Center Way west of Seal Beach Boulevard.

• It is unfortunate that some in the community feel it necessary to try to scare the neighbors into believing that health clubs bring crime into a community.  The reality is that in communities where crime is far more prevalent than it is in Seal Beach and where, unlike at The Shops, on-site security is lacking, car burglaries do occasionally occur in shopping and fitness center parking lots.

To the contrary, however, The Shops’ on-site security logs show that since 2012, only one “burglary from a motor vehicle” has been reported.

In fact, for several years as many as 100 cars have been granted permission to park overnight in the general area where LA Fitness will be built, and there has not been an outbreak of crime or car burglaries.  There simply is no fair justification for project opponents to play the crime card.

The opportunity to add LA Fitness to the Shops at Rossmoor is part of a very strategic initiative to ensure that our center remains vibrant for many years to come.  Our mission is to create a center that enhances and increases the customer experience, an experience that helps combat the “meteoric rise of Amazon and other internet-based retailers” as the daily online commercial real estate publication, GlobeSt.com, has noted.

LA Fitness will not only be a first-class fitness center to enhance the health and wellness of the community, but also a critical component to assure the continued vitality of the Shops at Rossmoor.

The Orange County Register editorial team noted “There is no reason why an LA Fitness cannot open at the Shops at Rossmoor.  It’s a shopping center, and that is where city planners have decided establishments like LA Fitness are supposed to go.”

We couldn’t agree more that LA Fitness is the perfect fit for the Shops at Rossmoor.

Martin “Marty” Potts is the project manager for the LA Fitness health club. 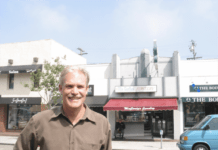