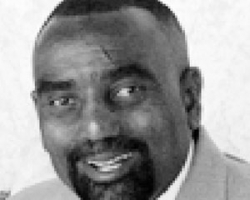 Rev. Jesse Lee Peterson, an outspoken critic of the liberal left and what supporters call “the so-called black leadership in America today” will speak at 7 p.m. on Wednesday, July 14 at St. Isidore’s Hall, 10961 Reagan St. in Los Alamitos.

Peterson has been referred to as the “antidote to Jesse Jackson.”

He is referred to in like-minded circles as “the bold, insightful alternative to the current administration’s far left and socialist leaning agendas, bringing clarity and direction to people of all races, social classes and religions.”

He is also the founder and president for the past 20 years of BONDAction, the Brotherhood Organization of A New Destiny, a non-profit, 501 (c) 3 organization, whose purpose is “Rebuilding the Family By Rebuilding the Man.” He is the author of the bold and highly popular books, “SCAM: How the Black Leadership Exploits Black America,” “From Rage to Responsibility” and “The Seven Guaranteed Steps To Spiritual, Family, and Financial Success” guide.

He is also the host of the nationwide “Jesse Lee Peterson Radio Show.”