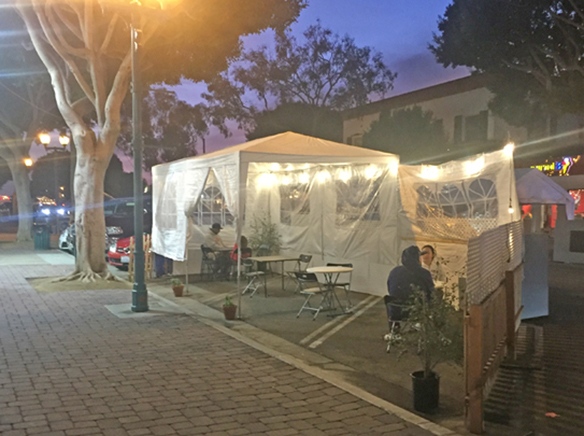 The Seal Beach City Council discussed the future of the “parklet” outdoor dining program on Monday, Sept. 12. The discussion came at the end of a meeting that lasted from 7 to about 10:21 p.m.

There was no vote, as the council took no formal action.

But it appears the parklets will be part of the city’s future in some form.

City Manager Jill Ingram said that the direction she heard from the council to come back with a “more permanent” program and create a council ad hoc committee.

District Three Councilman Mike Varipapa, who terms out of office at the end of this year, said he would like to be on the committee.

One of the issues raised is that some parklets have not been kept in good condition. Another issue is cleaning the gutters in the vicinity of the parklets.

Community Development Director Alexa Smittle pointed out that there’s nothing in the city code concerning the maintenance of the parklets, which makes code enforcement a challenge.

“That’s 25% of the spaces that exist on Main Street and then also including those few spaces along the ocean there at the intersection,” Smittle said. According to Smittle, other cities are seeing a decrease in parklets because they are no longer free.

According to Smittle, early discussions among staff indicated that the city would have to come up with a plan to offset lost parking.

“One of the suggestions has been some sort of a transit system. We’ve looked at micro transit things like that to help people get in and out of Main Street without those parking spaces,” Smittle said.

Main Street businessman Woody Woodruff opposed keeping the parklets. “I was a member of the last parking commission we ever had. And I’m also a past manager of a bar and restaurant. And what I want to say is we have less parking than 1977 and you’re taking away more parking for parklets. If we take these parklets out, we still have alfresco dining. There’s many places up and down the street. But we don’t have more parking. And parking is the lifeblood for the retail and the service industries,” Woody Woodruff said.

He also complained about the behavior and language apparently used by some patrons of the parks.

“This town’s always been known as a family oriented town and people begged us not to change; we have changed. It’s a bar street,” he said. He said Seal Beach Main Street was not any different from Second Street in Long Beach or Main Street in Huntington Beach.

Woodruff argued that the parklets were hurting business and that fewer people were coming to Main Street.

Kori DeLeon, a past Chamber of Commerce president, reminded the council that the Chamber supported the parklets. “The Seal Beach Chamber took a stance on parklets earlier this year. We we polled our local restaurants and many of them feel that they will not be able to operate it as well without this much needed entity,” DeLeon said.

“These days with employment issues and supply chain issues, this is more important than ever. We do not deny that the parklets need to be cleaned up and they need to be looked at in a different way,” DeLeon said.

Rowe disagreed with Woody Woodruff that businesses were hurting.

“People are coming in. And so numbers aren’t dropping. They’re not going elsewhere,” Rowe said.

“I actually don’t know anybody that’s closed this summer due to going out of business because of lack of parking or anything else,” Rowe said.

“So I would like to see their parklets continue on a temporary basis as a permanent plan is looked into,” Rowe said.

He agreed the parklets needed work.

Lisa Woodruff opposed keeping the parklets. “I want to thank you for letting us give our opinion on the parklets and not just make a decision and we don’t have a say in it,” Lisa Woodruff said.

“Sometimes I feel the decision’s already been made and we’re wasting our time just giving our thoughts so I’m hoping that you really do consider everybody’s opinion. All customers, not just restaurant owners or people that want to eat outside. But everybody—all the merchants, all the service industry,” Lisa Woodruff said.

She specifically complained about the gutters of Main Street.

“God knows what’s in that muck,” she said.

She asked the council to think of all businesses and customer bases, not just restaurants and their customers.

“I don’t like some of the things I observed, especially on the weekends when city staff is in here, for example is like the trash overflow. I mean it’s tremendous at some of these breakfast spots,” Varipapa said.

Varipapa said a lot of parklets are closed half the time, which he found unsightly.

He said the parklets do provide a nice environment. He called for fees to be associated with parklets.  He said more onus needs to be on the business owners.

District Four Councilwoman Schelly Sustarsic and Varipapa both expressed concern about the square footage being used by parklet owners. “Some of these restaurants are basically doubling their space and not paying for it,” Sustarsic said.

According to District One Councilman/Mayor Joe Kalmick, the city is looking at grants to fund a shuttle program for the Main Street area.

The parklets began in June 2020, according to the staff report  by Community Development Director Alexa Smittle.

According to Smittle’s report, the city has received complaints about some parklets that were poorly maintained.

“City staff has spent a substantial amount of time, particularly over the summer, working with parklet owners to improve the condition of their dining areas. Other Main Street businesses have also suggested the loss of parking spaces reduces convenience and impacts their business clientele,” Smittle wrote.

She reported that the Seal Beach Chamber of Commerce supports parklets.

In Smittle’s report, city staff suggested a program that would last through Jan. 1, 2024.

“The street-based, temporary parklets will be replaced with raised platform structures, level with the adjacent sidewalk,” Smittle wrote.

“Potted landscaping may be required. All costs of construction and maintenance will be the sole responsibility of the parklet owner. Parklet owners would be given 60 days to commence parklet conversion,” Smittle wrote.

Parklets would be at least 10 feet from intersections, according to Smittle.

The businesses would have to serve two meals a day, six days a week, according to Smittle’s report.

“The cost of constructing a three parking space parklet is anticipated to be a minimum of $15,000,” Smittle wrote.

Smittle reported that staff expects the number of parklets to decrease. However, staff is proposing a limit of 43 spaces in the Main Street area.

“The City Council may also want to consider a mitigation fee to fund small projects or services for the Main Street area,” Smittle wrote.

“Almost all of those establishments converted parking spaces to dining areas, and most were located along Main Street. Since that time, parklet operation has fluctuated,” Smittle wrote.

“As restrictions relaxed, some parklets were eliminated by businesses, and operational permits for those remaining have been extended from time to time,” Smittle wrote.

“In April 2022, parklet owners became responsible for the costs associated with the rented K-rails,” Smittle wrote.

“The most recent City permit extension will expire on September 30, 2022,” Smittle wrote.