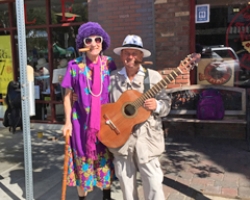 Aunt Gertie and Bob the Busker

Bob has been busking on Main Street in Seal Beach off and on for 30 years.  He can croon tunes in Korean, Spanish, French, German, Italian but mostly English.

He sang in the high school choir and studied classical voice for eight years.  Bob took up guitar as a teenager and played on the family porch with his brother -in-law.  He joined the Navy and came out West from Aurora, Illinois and loved it so much he stayed.  Bob will greet you with a smile and a song and he’ll make you feel right at home.  He’s another colorful treasure in our lovely town.  Go enjoy some nifty music and tell Bob, Aunt Gertie sent you!

Karen Hadley, creator of Aunt Gertie, can be reached by email at Yodelon@aol.com or at www.facebook.com/karen.hadley.39