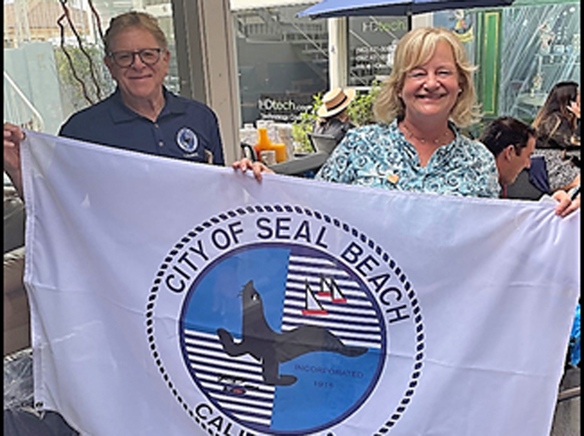 Seal Beach District One Councilman and Mayor Joe Kalmick said Foley has monthly breakfast meetings with each city in her district.

Kalmick described it as an opportunity for her to have direct contact with representatives of her cities.

Kalmick said he gets to hear what’s going on in different cities.

According to Kalmick, the city flag was provided in part as a response to a request from Foley’s office that apparently came after she was elected to the District Two supervisor’s seat, to provide city photos and flags.

According to City Manager Jill Ingram, Supervisor Foley provided updates from her district, including COVID-19 vaccination rates. According to Ingram, 82.1% of Seal Beach residents 65 years or older have had at least one does.

In related news, District One Supervisor Andrew Do and District Four Supervisor Chaffee have reportedly directed county health officials not to participate in Foley’s daily COVID updates. In a joint statement issued by Do and Chaffee on Sept. 2, Supervisor Do accused Foley of using her power to promote herself.

In a Sept. 3 statement, Foley said she found it “concerning that some view transparency as an abuse of power.”

The Do/Chaffee statement said that Dr. Clayton Chau, OC Health Care officer, provides the Board of Supervisors with weekly updates.

Locally, Foley is scheduled to be in for a ribbon cutting ceremony for the new beach-accessibility mats.

The event is set for 9 a.m., Friday, Seal Beach on Sept. 17, in the Eighth Street Parking Lot.