For the past two months over 100 athletes of the LAHS Griffin Cross Country team have been putting in plenty of hard work, miles and miles of running, doing core and strength work and preparing for the upcoming season.

All that hard work paid off in a big way as the Griffins dominated at their first invitational in two years. Competing against 45 other schools at the Fastback Invitational at Mt. San Antonio College the Griffins started the day by winning the first two races and finishing second in the third. The Mt. SAC course is a legendary running venue offering some of the toughest racing in the western US.

The Griffin boys team had an outstanding start to their season. The top 5 boys (scoring team) ran together finishing within 8 seconds of each other. That grouping will pay off big this season for the Griffins. The seniors were led by Michael Sandoval, Tyler Austin and Vance DeBrabander – taking 4th overall. Zachary Nakada and Daniel Mastick led the juniors to a 6th place finish. The sophomores finished 2nd behind strong racing by Isaac Parhami and Charles Villegas.

The freshman opened their season with a 7th place finish led by James Sells and Jaxon Nguyen.

The Griffins are a perennial powerhouse in the Sunset league and Southern California. This upcoming weekend the Griffins travel to Laguna Hills for their next race and the weekend after the Griffins will take part in their annual Varsity and Seniors trip for a weekend of racing and fun at the Mt. Carmel Invitational in San Diego. They will race in 3 additional invitationals in October before racing at League Finals on Oct. 30 on their way to CIF post season competition. 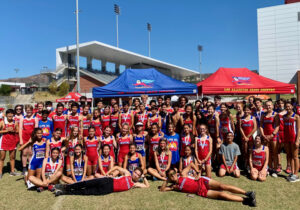