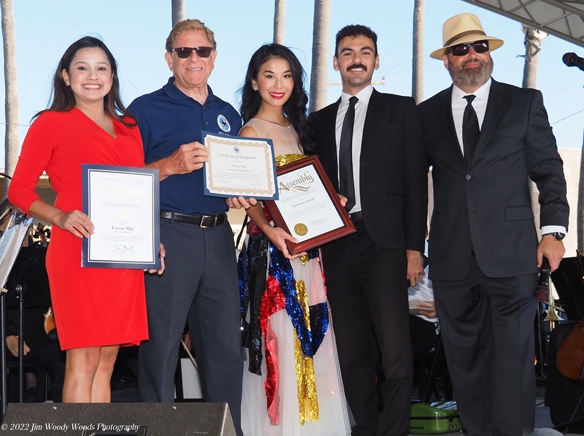 People were filing into a fenced off section of Eisenhower Park as the Sunday, Sept. 18, “Patriots in the Park” concert began. Seal Beach Lions served as ushers, helping guests find their seats.

The performance was the culmination of planning that began in October 2021.

“From what I could see from the stage it was a capacity crowd of standing room only in the back as well as those out on Ocean [Boulevard] and its surrounding neighbors who took up a collection for the Symphony after the production,” wrote Chad Berlinghieri, artistic director of the Seal Beach Symphony in an email.

“Having been a coach for years,” said sponsor Jim Klisanin of Baytown Realty, “I put Chad in the ‘Big Coach’ category for putting that show together.”

Asked if the Symphony anticipates putting on the “Patriots” show again next year, Berlinghieri wrote, “Absolutely!”

Berlinghieri wrote that planning for the next show will begin after the performance of “Love Songs,” on Feb. 11, 2023, at Old Ranch Country Club. “Love Songs” will be the Seal Beach Symphony’s final event of the 2022-23 Season.

The conductor was Scott Melvin.

Berlinghieri expressed thanks to the volunteers who helped in the project. According to Berlinghieri, Angie Concholla was the Hot Dog Chair.

The hot dog stand generated $600 in sales that will be donated to the Youth Center. Debbie Meilke from Chase Bank handled the day of Box Office sales. Lions Tim Ganatta was chair of the Lions Chair Volunteers. Pavilions provided VIP Baskets and the Temecula Olive Oil Company provided gift bags of dipping sauces.