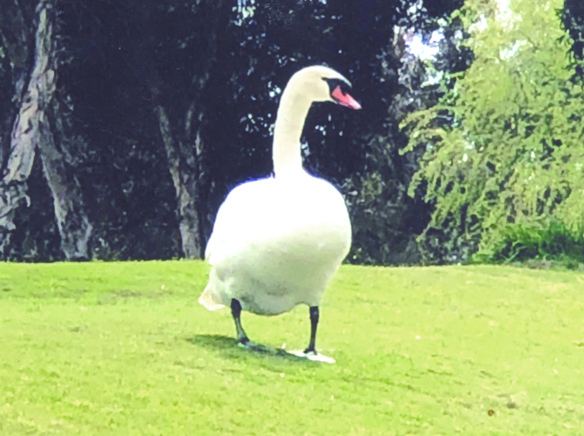 An impromptu, word-of-mouth memorial was attended by approximately 50 people, who gathered to say goodbye to and remember a local swan.

Gretchen the swan lived on the grounds of Old Ranch Country Club for several years. The large bird was well known by the members and players at the club and she had become a beloved member, despite being somewhat cantankerous at times.

Last week, Gretchen was taken from her home and the people who had grown to love her, presumably, by a coyote. The loss hit Gretchen’s adopted human family hard.

“It’s sad because she was kind of like a mascot,” Seal Beach resident and club member Carla Watson said.

Gretchen was the only swan living permanently on the grounds of the club. Over the years she had gotten comfortable with the people. She would walk up to the snack bar area and sometimes find food. Director of Membership for the club, Renee Ord helped organize the memorial and remembered Gretchen fondly.

“She had a super unique personality,” Ord said.

Ord said that if Gretchen was on the water and she called her by name, Gretchen would swim toward the shore to check why she was being called.

Ord said Gretchen seemed to be fonder of men than women. But she could get cranky and would sometimes charge people. One of the club’s employees, Mark Sakamoto, became particularly close to Gretchen. She seemed to trust him the most. Sakamoto would pet the back of her head and get her to walk back towards the lake.

Sakamoto became known as the “Swan Whisperer,” around the club. Watson said that birds are part of the fun of golf. A wide variety can be seen on most courses, but Gretchen had become much more to those at Old Ranch. The memorial was scheduled for April 24 and word quickly spread.

Several people shared stories of Gretchen and Watson adapted the words to the song, “You are my sunshine,” into an ode to Gretchen, entitled “Gretchen, a Swan Song.” Each attendee was given a picture of Gretchen, with the lyrics on the back. Watson played the tune on a ukulele, as the group sang along.

You were our sunshine,

You made us happy when skies were grey.

how much we loved you.

We’re so sad our Gretchen went away.

For most of her time on the course, Gretchen spent her nights safely floating on the lakes. But recently, she had made a nest and laid some eggs. She and Mark had developed a routine, in which he would cover the eggs and then walk her to the lake before sundown.

Gretchen would return to check on the eggs in the morning. It is believed that she might have returned before the safety of daylight had fully returned, which left her vulnerable to a coyote attack.

Members are having a plaque made in her honor. They hope to have it installed on a bridge along the ninth fairway and name the bridge, Gretchen Bridge. Though she was taken suddenly, Gretchen, it seems, is not likely to be soon forgotten.