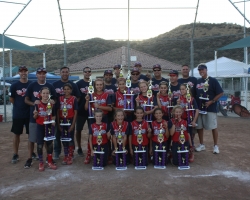 After tying their first game, Los Alamitos battled the areas top teams, winning the next five games and the championship title.

But there was more involved than just winning.

The Amanda McPherson All-Star Tournament is hosted by Simi Valley Girls Softball in memory of Amanda, a little girl who loved playing softball.

Amanda’s father met with each team during the three day tournament to talk a little bit about Amanda, her struggle, and why building the field was so important to them.

“Amanda loved playing softball with her friends. She loved being part of a team, cheering in the dugout and waiting for the treat after the game. There are so many life lessons to be learned by playing on a team and we want to promote that spirit in Amanda’s name. Youth sports brought great joy to Amanda’s life,” said Amanda’s father.

Teams from all over Southern California play in the tournament, raising money to help with medical research and support youth sports.

You can learn more about Amanda and her family’s mission at .