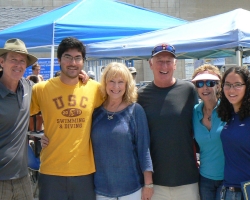 Los Al resident, Madelyn “Dolly” Payne received the Lee Brennan Scholarship awarded to outstanding Southern Pacific Association California divers.  She is the fifth McCormick Diver to win the honor since its inception in 1999 including her brother, Adam winning in 2012.

Lee Brennan was a top student athlete from Aliso Viejo excelling in diving as well as football, wrestling, and track.  He died in a car accident on his way to Arizona State University where he was to be a member of their diving team.  His dynamic spirit lives on through the good works of his parents Leo and Bev Brennan who sponsor scholarships in Lee’s name.

Payne was awarded the scholarship based on her ability to maintain excellent grades (she is a 2015 Los Alamitos High School Valedictorian) while competing as a top Varsity athlete in both diving and tennis.  She won the Sunset League Individual Diving Champion Title three years in a row and helped win the team title four years running.

At an early age, Dolly spent time at Belmont Plaza Pool while her brother Adam was diving with McCormick Divers. Initially, she would sit by coach Debby McCormick who knew her by her nickname, Dolly. She has been Dolly in the diving world ever since.

She first learned how to swim at Water Safe in Seal Beach when she was less than a year old. As she grew and took on more activities she stopped swimming lessons. But she was afraid she would “forget my moves” so she took swimming lessons at Belmont Plaza Pool while her brother was diving.

Just before she turned 5, her family moved to Sydney, Australia. There, she was able to enroll in Advanced Beginners as a five year old while her brother trained with Australian Olympic Diving Coach, Chava Sobrino. Within a few months, she too started diving. As the youngest diver on the team, she was a trailblazer. Swim coaches raised concerns about letting someone so little dive.

In response, Sobrino started a “Nippers” program designed for young divers like Dolly. When her brother started diving in Southern California, he was able to compete in 7 & Under competitions. However, when Dolly started in Australia, Diving New South Wales had only 11 & Under Age Group Categories and a Novice Level with no age limits. Dolly competed against 15 and 16 year olds in her first dive meet. This prompted officials to change the ages to 13 & Under and 14 & Older. Even with that, Dolly was holding her own, competing with divers twice her age.

Luckily, her family came back to Southern California on home leave in June each year where she was able to train for a week with McCormick Divers at Belmont Plaza Pool. This was also around the time of the Annual Lee Brennan Memorial Meet in Crown Valley.

It was at this same meet where she just earned the Lee Brennan Scholarship that she won her first dive meet when she was able to compete against divers her own age in the 7 & Under and 9 & Under Girls events.

Dolly continued training with McCormick Divers when her family relocated back to Southern California in 2007.

Dolly will be using the $3,000 scholarship at Massachusetts Institute of Technology where she will be a member of the diving team.