They weren’t there to march. They didn’t chant or really even protest. Measures were taken to keep the gathering as non-political as possible. They simply wanted to express support for the Black Lives Matter movement and remember George Floyd, the man who died in the custody of four Minneapolis, Minnesota Police officers on May 25.

The group of about 50 Leisure World gathered on June 18, near the library of the residential community. One resident, Don Koepke spoke briefly to explain the process. The event was essentially a moment of silence for eight minutes and 46 seconds, after which the vigil would be over.

“We’re here to express our solidarity with the people around us,” Koepke told the group.

A small gong was rung to start the vigil. The groups stood or sat in silent contemplation until the gong rang to signal the end of the moment and the vigil. Some attendees lingered in small group discussions.

Pat Kruger, another attendee said that a small group had held a demonstration in front of the community the prior week. She also noted that with the age demographic of the community, many people are not comfortable attending the larger rallies. However, she said there are members of the community who wanted to show support for the movement and for reform.

“We have to have hope,” Kruger said.

After the silent vigil, Koepke said that the goal of the “Seniors for Peace” group has been to provide educational events, rather than political statements. He said that the issue of discourse and the role of the police in minority communities is one that needs to be addressed.

“Without justice, there is no peace,” Koepke said.

The Seniors For Peace group started many years ago as an anti-war group. Tom Pontac, one of the original founders of the group said that when he was growing up, he saw and experienced racism, both against blacks and against him as a Jewish person. However, while times have changed somewhat, he sees now that things have not changed enough, particularly for the black communities. 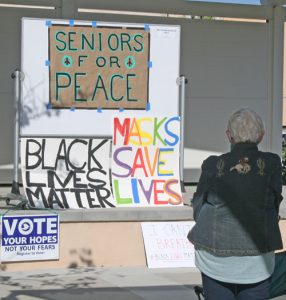 Since the killing of George Floyd, one month ago, rallies and protests have continued, even in predominantly white communities. Pontac said that he thinks the reason is that more white people are starting to see the injustices more clearly, including himself.

“I feel enlightened, I feel like I was in the dark,” Pontac said.

Kopeke said that the Seniors for Peace may have formed as an anti-war group, but he said it has stayed active by trying to address any issue related to freedom. He noted that what he sees happening is a direct result of slavery and the oppression that has followed since.

He also acknowledged that “white privilege,” is something that some white people have trouble getting a handle on and admits that while growing up in a segregated Chicago in the ‘50s he had almost no interaction with black people until his 20s, leading to some challenges for him.

He is also hopeful that this current push for change will finally bring it about. He said that the first step is hearing the term, Black Lives Matter, as a call for discussion and the first step towards that change.

“We need to start listening, not to ourselves, but to our black brothers and sisters,” Koepke said.