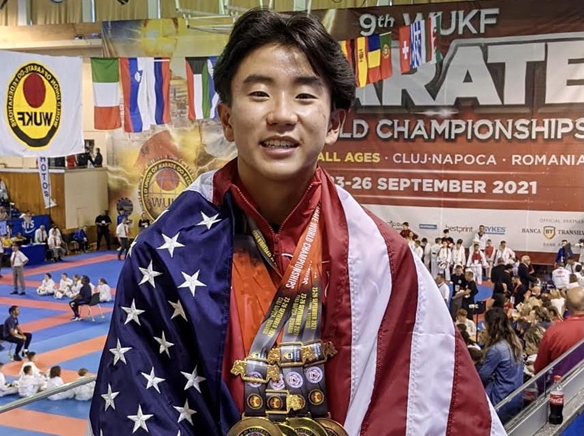 When Reece Yoshizawa was 4 years old, he did anything to mimic Power Rangers such as flying jump kicks, cartwheels and karate-chops. His parents thought it would be a good idea to sign him up for karate classes. Yoshizawa, now 16 and a senior at Los Alamitos High School, just returned home from Cluj-Nopaca, Romania where he represented the United States at the 2021 World Karate Championships and clinched 3 Gold Medals, 1 Silver Medal and 1 Bronze Medal. He is now a World Champion in Karate.

More than 1,300 accredited athletes from 35 countries competed at this event, composed of 4 days of competition and 9 days of related activities and training. The championship is one of the most important sporting events of 2021 organized by the World Union of Karate-do Federations. Yoshizawa competed in five events and he attained his goal by medaling in every event. Three gold medals in kata (forms), silver medal in short weapons (sai) and a bronze medal in kumite (fighting). Yoshizawa competed against athletes from Italy, Bulgaria, Kuwait, Ukraine, Romania, Mexico, USA and the Czech Republic. He took top scores in every round to advance to finals in every event.

Yoshizawa has been on the Jr. National Team for the past four years and began competing in local and national tournaments since he was 7 years old. He has traveled internationally to Guayaquil, Equador for the Junior Pan American Games and to Santiago, Chile for the Junior World Championships where he earned his first World medal, placing second in 2019. Nationwide Karate tournaments have taken Yoshizawa to Hawaii, Florida, Indiana, Arizona, Oregon, Washington, Illinois, North and South Carolina, Nevada and Texas. Yoshizawa will try out for Senior National Team at the Olympic Center in Colorado next January.

Yoshizawa found his passion in karate at a young age and always looked forward to training. He trains 3-4 times a week for several hours at Art of Strength in Irvine, CA and credits his Sensei Chad Eagan for much of his success. “He is a great Sensei.” Yoshizawa said of Eagan, who has been his instructor since he started training. “He is strict during training but after training, he is like a regular guy and we all have fun. During training we learn all aspects of karate including discipline, respect, focus and goal setting. It is not always about the kata (forms) or kumite (fighting).”

Yoshizawa would like to teach future generations karate so they have the opportunity to have the same experiences he has had.

At the high school, Yoshizawa is active in ASB.

Yoshizawa also volunteers his time at Lee Elementary School and in his spare time, he enjoys surfing at local beaches.