Proud parents and supporters surrounded the pool deck as the Griffins hosted the Barons of Fountain Valley High School.  The swim meet between these two teams was expected to be close and exciting.

With 11 events per meet, the boys relay came down to the final race against a tough and fast Baron team.

With the boys 4×100 the last event, swimmers Alex Merrill, a senior, his little brother, freshman Max Merrill, junior Joe Ferretti, and junior Jack Blake, put the burners on and won the race amongst cheers and pandemonium from the crowd.

Coach Dave Carlson was proud of his swimmers.  “The sunset league is the fastest league in Orange County.

Five Sunset League teams are ranked in the top 10 in the county and the competition is really tough,” said Carlson.

The Griffins take on Esperanza next week. 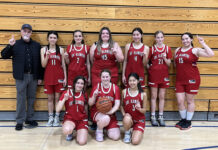