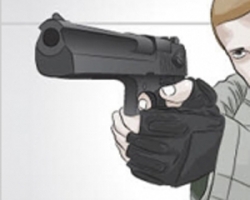 A Ralphs grocery store employee reported a robbery in progress to the Seal Beach Police at 10:25 p.m., Saturday, May 14. The employee said the man was robbing the store at gunpoint. The Ralphs is located at 1270 Seal Beach Blvd.

Responding officers arrived within two minutes, but the suspect had fled the store. Officers from the Seal Beach Police, Los Alamitos and Cypress police agencies, using K-9 units and a helicopter, searched the surrounding areas for the suspect. The search area included the Old Ranch Country Club.

Unfortunately the suspect escaped with an undetermined amount of cash.

The suspect was described as a white or Hispanic man in his early 20s, 5 feet 3 inches tall and skinny. He was wearing a dark colored “hoodie” jacket and dark colored jeans. The weapon used was a black, semi-automatic handgun.

No one was physically injured during the robbery.

Police asked that anyone with information about the case call Seal Beach Police Detective Gary Krogman at (562) 799-4100, extension 1108.

The Seal Beach Junior Lifeguard Program is coming up. Registration is open and for new prospective Junior Guards the swim test dates are as follows:

Welfare Check—5:31 p.m.—Seal Beach Boulevard—The caller said an infant in a child safety seat had been left inside a vehicle with the motor running. Police unit 205 checked. A grown man was also inside the vehicle. Police unit 205 determined no further police services were necessary.

Disturbance—11:09 a.m.—Main Street and Central Avenue—The caller said a man was in the lobby, refusing to leave. Police unit 107 contacted the man and gave him a warning.

Citizen Assist—11:39 p.m.—Montecito Road—An elderly woman was locked in her home and could not open the door. A minute later, police received another call: her caregiver got the door open. The call was cancelled prior to the dispatch of a police unit.

Suspicious Occupied Vehicle—1:31 p.m.—Forrestal Lane and Seal Beach Boulevard—The caller said a Hispanic woman wearing a purple outfit was taking pictures of the Naval Weapons Station from inside a vehicle. NWS had a unit en route. Police were unable to locate the suspect.

Vehicle Burglary—9:25 a.m.—Seal Beach Boulevard—The crime apparently occurred between 11:45 p.m., Friday, May 6 and the time of the call to police. Point of entry: a smashed rear passenger window. Loss: a GPS device and an iPod.

Attempted Fraud—12:28 p.m.—Monterrey Road, Mutual 2—A Leisure World resident received a call from an individual claiming to be the resident’s grandson.

The “grandson” asked for money to be wired. The citizen’s attorney stopped the transfer. No loss at this time.

The citizen was counseled. The Los Alamitos Police Department blog recently posted a warning that the grandchild scam is apparently on the rise in the Sun Region.

Health and Safety Violation—8:44 a.m.—Howard Avenue—A woman was arrested on charges of violating the California Health and Safety code. She was arrested for possession of cocaine. Los Alamitos Police have asked the Orange County District Attorney’s Office to prosecute the case as a felony. The DA’s Office is still reviewing the case.

Suspicious Person—7:48 a.m.—Orangewood Avenue—A citizen phoned to report that a man was handing out “predator alert” flyers. The citizen called back to report that the individual has been known to carry a gun. The responding officer spoke with the man, who had not violated the municipal code. No weapon was found on his person or in his vehicle. Both parties were counseled.

Welfare Check—6:20 p.m. Corporate Center Drive—The caller said a man with a dog appeared to be attacking a female at the rear of the property. The caller was unsure if they were just doing drills or if the attack was real. Responding officer found people who were training dogs.

Traffic Hazard—11:26 a.m.—Los Alamitos Boulevard and Flood Control—A large bag of gardening trimmings fell from a truck into the southbound lanes of Los Alamitos Boulevard. The debris was moved out of roadway to the east side of the street. The responding officer recommended that Public Works remove the debris.

Possible Fraud—8:23 a.m.—Chestnut Street—The caller gave a company personal information regarding taxes and now that company is requesting payment. The caller believed the company is a fraud and they are not affiliated with the government. Caller counseled.

Traffic Hazard—5:30 p.m.—Bloomfield Street and Farquhar Avenue—The caller reported two women laying in the middle of the street and causing a traffic hazard. The caller said he almost hit them.

Vandalism—1:03 p.m.—Katella Avenue—Three juveniles broke some of the caller’s antique chairs. One juvenile admitted to sitting in the antique rocking chair, but said that he didn’t damage it. The juvenile’s mother was contacted by telephone and said that they will make arrangements to pay for the damages.