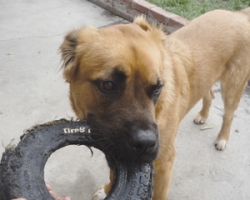 Sun Region resident Bandit needs a new home. His humans cannot keep the golden retriever/German shepherd mix for health reasons. “We are heart-broken that we have to find Bandit a new home.  He is such a great dog and I wish we could keep him, but I have to be able to breathe,” said Nancy Gonzalez.

Gonzalez said that since Bandit came into her family’s home, she has developed infection after infection. Gonzalez believes the infections come from the asthma that developed from her allergies.

“I grew up with dogs and never understood why I was always sick, had shortness of breath, and allergies … my doctors always blamed my anemia for my illness,” Gonzalez said.

“And since I’ve been out of my parents’ house (for about five years), I’ve always wanted a dog (like Bandit) of my own,” Gonzalez said.

Apparently, that wasn’t meant to be.

Bandit is 16 months old, weighs 73 pounds, has been microchipped, neutered and crate-trained. Gonzalez said he is up to date on his shots. The Gonzalez family believes he needs a lot of exercise, lots of correction and rewards. Nancy Gonzales said Bandit needs someone who will give him a lot of attention and not just leave him alone for long periods of time.

“We are also willing to keep Bandit until he is able to be adopted,” Nancy Gonzalez said.

For more information about Bandit, contact the Rossmoor Predator Management Team at (562) 253-2330 or e-mail rebtravis@aol.com.