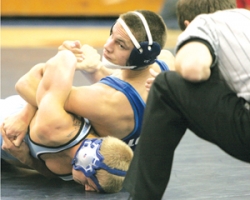 The Los Alamitos wrestling team has had a scorching hot pre-season.  The Griffins were undefeated at the Millikan High School tournament, won first place at the Irvine Andrew Pena Classic Tournament (earning 8 medals), and won the tri-school meet with Villa Park and Santa Margarita.

Before season began, the wrestling team and coaching staff grieved the sudden and tragic death of beloved coach, Frank Angulo.

Coach Angulo, 48 years old, passed away on Nov. 8, leaving a wife and six children behind.  The passing of Coach Angulo rocked the team to its core.

Angulo always referred to the match between the Griffins and Spartans as the “grudge match.”  Undoubtedly, to this already tight knit team, this event made the team even tighter and inspired to perform well.