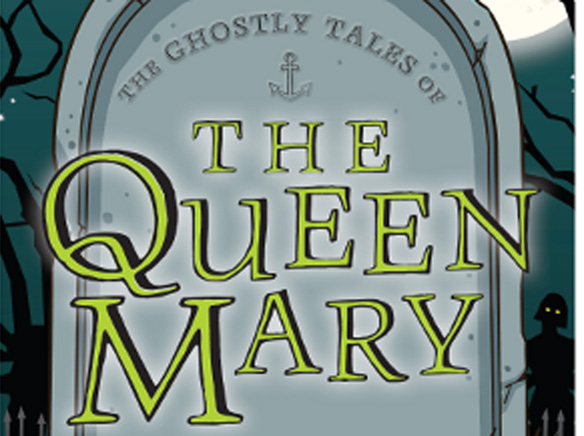 The famous ocean liner Queen Mary has been a hotel, museum and landmark of Long Beach after arriving in 1967, after 31 years at sea. The elegant ship, once the fastest to cross the Atlantic Ocean, was known for its VIP passengers, from Queen Elizabeth and Prime Minister Winston Churchill to Hollywood Celebs like Elizabeth Taylor, Bob Hope and Bing Crosby.

But it also was refitted as a troop carrier and hospital ship during World War II and called, “The Gray Ghost.” “She would appear in the enemy’s sight yet be gone before they could fire on her,” wrote Shelli Timmons, who examines ghosts still on board. “She was so fast.”

Some reportedly became ghosts after passing away in the heat, since there wasn’t any air conditioning when it traveled through the South Pacific, Indian and Mediterranean Seas. During the war, it sailed more than 600,000 nautical miles.

Timmons tells about several ghosts, who can sometimes be seen, heard or felt on the ship, which now also features special events:

• The last Captain, John Treasure Jones, can be heard in the Propeller Box section of the vessel and smoke from his cigar has been smelled around his favorite haunts.

• Jacqueline Torin, 6, may be the most popular phantom. “Little Jackie” likes to speak, giggle and play in the pool area. She also plays peek-a-boo with visitors from an upstairs balcony and has a friend, Sarah, 8. There are sounds of them running and laughing near the Propeller Box.

• Winston Churchill traveled on the Queen several times, often using the assumed name of “Colonel Warden.” His particular brand of cigar smoke has been recognized near the suite that bears his name as well as in the ship’s top restaurant, “Sir Winston’s” (even though smoking is not allowed).

• ”The Dude” is a chap in top hat and tail coat, who hangs out in the bar at Sir Winston’s.

• Visitors have sworn they’ve seen Jack and Torrance, two U.S. Army soldiers from World War II, who appear and disappear with ease. In 1943, The Queen set a record by transporting 15,740 troops.

• Daniel “The Blue Boy,” 6, wears blue clothes and has been sighted in both the Promenade and Shopping Portions of the vessel.

Guests on the Queen say the First Class Pool is a hot spot for ghosts and the most haunted room aboard is B340.

Author Timmons’ delightful book will prep you on who to look for and where to possibly spot the ghosts of the world’s most legendary ship. “Can you believe that this floating hotel is one of the most haunted places in America?” asks Timmons.

(My friend, the late Art Leavitt, an Army veteran, returned from World War II on the Queen Mary, and another pal, Irene Sellers, came across the Atlantic on the ship to perform across America in the Ice Capades.)