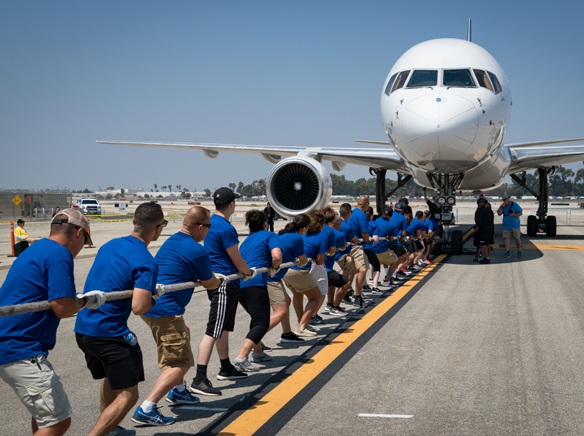 Saturday, August 17 is sure to be an action-packed and meaningful day, and you won’t want to miss it. At the Long Beach Airport, Special Olympics Southern California will host two incredible fundraisers that are estimated to raise a total of $450,000 total. Join us as we compete for bragging rights and pull a plane.

The 14th annual Plane Pull will test participant’s strength and endurance as teams of 25 pull a 124,000-pound UPS jet. Just up the runway, UCLA and USC fans will take to the streets to race for pride and Special Olympics in the 5K/10K rivalry run.

Last year’s Plane Pull raised more than $190,000 dollars for Special Olympics Southern California. To get involved you can create a team, sign-up individually, donate, or become a sponsor. Teams are made up of 25 people, but don’t worry if you can’t complete your team. Individual pullers will be added to teams of less than 25 people on the day of the event. The minimum amount of money for a team to fundraise is $1,500. As an individual, the fundraising commitment is $60. Sign up at www.sosc.org/lbplanepull.

“The Plane Pull is a very unique and fun way to support Special Olympics Southern California athletes,” said SOSC President and CEO Bill Shumard. “It is all about teams competing against each other to pull more than a plane – we’re also pulling for inclusion for people with and without intellectual disabilities. We are pulling for each other.”

To donate to the Plane Pull, you can support a team, a participant, or make a general donation. As a sponsor, you can raise awareness for athletes with intellectual disabilities, expand your customer reach, and build team morale. Sign up to conquer the Plane Pull at www.sosc.org/lbplanepull.

“The Plane Pull has grown to be more than just pulling a plane,” said Shumard. “It is a family-friendly event, offering something for everyone. It is such a great way to be a part of our movement of inclusion and acceptance, while helping us serve more athletes, changing their lives, the lives of their families, and of the community.”

We Run the City 5K/10K is an exciting event featuring USC and UCLA students, faculty, alumni and fans who compete for bragging rights and to take home the We Run the City Trophy. Each runner/walker must declare their allegiance at the time of registration and whether they are an alumnus, faculty, fan, staff, or student. They are then a part of Team USC or Team UCLA. Competition is broken into three categories: amount of runners/walkers, fundraising, and the school that has the first 100 runners to

cross the finish line. The school that wins at least two out of three, claims victory and their school has bragging rights and the trophy for the year!

Those interested in participating can walk/run in the 5K or 10K or participate in the kid’s race. If you can’t make it out to the event, you can register for the virtual race. Learn more at www.werunthecity.com.

OC Health officer: Public Health Order is NOT an order to shelter in place 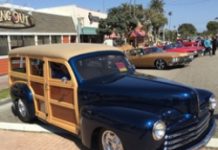 COVID-19 Shutdown likely to leave no one unaffected

‘The Briefing Room’ offers a chance to ask police questions

COVID-19 Shutdown likely to leave no one unaffected

‘The Briefing Room’ offers a chance to ask police questions