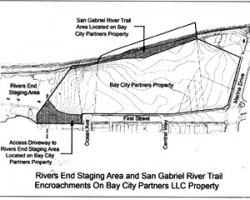 The Seal Beach City Council on Monday, June 13, received and filed a staff report on the city’s settlement agreement with Bay City Partners, owners of the land commonly known as the DWP site.

The first meeting on the proposed development project was scheduled for Monday night, June 20. The details of that meeting were not available at press time.

Earlier this year, Seal Beach officials settled two lawsuits between the city and the owners of the DWP property.

The first suit was filed by Seal Beach, in an attempt to use the process of eminent domain to obtain a private road in order to have access to a sewer line.

The second suit was filed by Bay City, challenging the legal description of parts of the San Gabriel River Bike Trail that Seal Beach officials planned to develop.  The Seal Beach plans did not mention that part of the bike trail runs through property owned by Bay City Partners.

Opponents of the settlement objected to the lack of environmental standards and complained that the city got too little from Bay City Partners.

Supporters of the settlement argued in favor of developing the property.

Councilwoman Ellery Deaton had requested the staff report following public criticism of the council’s decision to settle two lawsuits between the city and Bay City Partners, owners of the DWP property.

She said there was absolutely no agreement between Seal Beach and Bay City to approve the project.

City Attorney Quinn Barrow said the public would have many opportunities to speak about the proposed development project itself.

Barrow said state law required the staff to consider the project in good faith, referring to language in the settlement that critics have cited as an agreement to approve the project without public input.

Jim Caviolla, a critic of the settlement, citing the 1982 specific plan for the property, said workshops at that time determined there should be 70 percent open space.

“I don’t get why you’re giving them land,” Caviolla said.

Mike Buhbe, who was active in the fight to lower residential height limits in Old Town, said the part of the property that the city purchased is where the old Los Angeles Department of Water and Power plant once stood.

Buhbe said he would like to see what remediation was done on that property.

Bay City Partners have refuted soil contamination claims in the past.

Buhbe also asked how Bay Cities Partners got 48 lots when the plan originally called for 39.

Paul  Yost, a former Seal Beach councilman, said he was concerned about the lack of beach access.

Mario Voce, of the Environmental Quality Control Board, said he would look very hard at the environmental questions concerning the proposed development. The EQCB is one of the city commissions that will review the project before it can be approved.

“The agreement itself is disgusting,” Voce said.

“It is nothing more than a big, horrible rip-off,” Voce said.

Councilman Gordon Shanks said the Seal Beach Historical Society had diagrams from the DWP property that could help with determining possible areas of soil contamination.

However, the proposed DWP project and the court settlement did have supporters. Shelley Bolander said the agreement had been a long time coming.

“Now the time  has come to addess what would be built on that property,” Bolander said.

Beth Gabler also supported the settlement and said it was time to stop calling it the DWP property. “It’s Bay City’s property and should be addressed as such,” Gabler said.

“I think that we should support the settlement as it stands and move forward,” Gabler said.

“The time is right to develop this property,” Outland said.