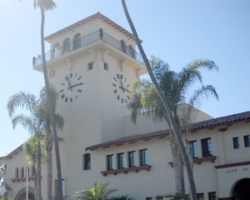 The Seal Beach City Council unanimously adopted a city wide public memorial policy Monday night, Dec. 12. The council adopted a schedule for planning a memorial for the victims of the Salon Meritage shootings.

The new policy requires residents to complete and submit a monument proposal that includes the desired location on a detailed map, any private funding that is offered or a request for public funding, approval by the city manger, a public participation strategy and design approval by the appropriate committee.

The City Council will approve the design and location of the monument and allocate public funds when they are applicable.

As for the Salon Meritage memorial, the staff report by Assistant City Manager Sean Crumby said the city had received numerous requests for a memorial for the Oct. 12 shootings.

The Crumby report did not mention specific requests.

However, resident John Fox has launched an on-line campaign to urge other Seal Beach residents to vote for a $50,000 Pepsi Company grant to build a permanent memorial to the victims. For more information, visit http://www.refresheverything.com/seal-beach-support-in-love.

Seal Beach staff recommended that only one Salon Meritage memorial be built. Staff proposed that the memorial be unveiled on the 2012 anniversary of the crime.

“Adoption of a schedule or outline is crucial so that the process can begin immediately,” Crumby wrote.

The council adopted the schedule that was outlined in the Crumby report. The schedule includes the following:

• An input form was placed on the city’s Web site on Tuesday, Dec. 13.

• Conceptual Design Development will be decided between Feb. 1 and Feb. 28.

According to Crumby, staff recommended discussing any city funding for the project at the mid-year budget review.

Councilwoman Ellery Deaton said she and Councilman Gordon Shanks had both spoken with residents about fundraising for the memorial. Deaton said she didn’t know what Seal Beach would do with a $50,000 grant for a memorial. Shanks said the memorial should be close to the location of the salon.

However, Mayor Michael Levitt disagreed. “A popularity contest isn’t the best way to select something,” he said.

“We need something that is going to work for other memorials as well,” Levitt said.

The memorial policy and the Salon Meritage memorial schedule were approved in a single unanimous vote.

That same night, the council honored four men who tried to help the Salon Meritage victims the day of the shooting. Interim Police Chief Robert Luman called the four men heroes. Luman said that Doug Childers, John Gallegos, Brendan Pena and Mark Sauerwein were working at a construction site near the hair salon when they heard the gunshots on Oct. 12. Childers and Gallegos were former Marines. They recognized gunfire.

The four men ran toward the shooting. The gunman briefly aimed his weapon at them. Childers, Gallegos and Pena went inside the hair salon. Sauerwein remained outside, keeping lookout. Sauerwein gave the first police officer at the scene information about the suspect.

Sauerwein was not present at the meeting. Mayor Levitt gave each of the three men present a plaque. Deaton hugged each man. Councilmen Shanks, Gary Miller and David Sloan shook their hands. Family members of the eight murder victims hugged and shook hands with the three men.

Earlier that evening, the council unanimously approved a first reading of an ordinance granting a citywide bus bench franchise to Coastline Advertising Corporation.

According to Crumby’s staff report, Seal Beach has 58 bus stops operated by the Long Beach Transit and Orange County Transportation Authority. The two agencies maintain signs for the bus stops, but not shelters or benches.

The Crumby report said there are 37 benches in Seal Beach, 32 without shelters. There are 25 shelters in the city.

“The city has never undertaken to regulate these benches even though they are on public property,” Crumby wrote.

Many benches display advertising, but Seal Beach has no control over their content.

The new contract would allow Seal Beach to review the content of bus bench advertising.

Deaton said she did not want advertising in residential neighborhoods. She also wanted to see trash cans next to the bus benches.

Levitt re-elected mayor and other news

• The council elected Michael Levitt for a second one-year term as mayor. He was the only candidate nominated. The vote was unanimous.

Councilman Miller, who was mayor pro-tem this year, was nominated for a second term as mayor pro-tem. He also ran unopposed. The vote for Miller was also unanimous.

• The council approved a revised agreement with Ampco System Parking to collect parking fees at the beach parking lots.

• The council amended its contract with Willdan Engineering for another $35,139 to provide additional reports to CalTrans.