Run Seal Beach is still 35 days away, but Seal Beach resident Jon Grillo is already feeling the pressure; not about the race. Grillo is an avid runner and finished 30th overall in the 10K event last year. Running is the easy part for Grillo.

What has him stressed this year is the pressure he is putting on himself to field the largest team. Grillo, 38, teaches world history at McAuliffe Middle School and is in his fifth year of organizing the school’s team. Last year he was able to draw 180 runners onto the McAuliffe team, the largest team in the field. Now he wants to repeat that feat.

“It stresses me out big time,” Grillo said.

Students and their families are the main target for Grillo. He encourages students to register for the race and join the McAuliffe team. Not only encourage, he gets time on the school’s morning announcements and challenges them to run. He offers to buy lunch for any student who beats his time in the 10K. So far, he said he’s only had to buy one lunch.

Grillo pushes the students in fun. But he’s also encouraging them to stay active. Whether they run or walk in the event, he just wants them to participate, for their own benefit and the benefit of the school. Each year, the non-profit Run Seal Beach distributes grants with the money raised to area programs for health and exercise. McAuliffe applies for money to help fund PE and other health equipment and activities.

“That money comes back,” Grillo said of the entry fees.

There were two races and each time dozens of students raced several teachers and principals and received a raffle ticket for each teacher they beat. Students were sizing up teachers as they got out to the track, talking about which ones they should be able to beat and which ones were the ones who might be a challenge.

One student was heard, asking “what about Grillo?” another replied, “he’s more of a distance runner,” not too concerned with his speed. Students were very successful in winning raffle entries and Grillo freely admitted after the race that he is not a sprinter.

In the 10K, however, students will be challenged to beat his time.

Still, for Grillo, the race becomes the secondary goal for anyone who joins the team. For Grillo, his primary goal is to bring people together and give them a sense of community for run or walk.

“I think being part of a team is more fun that running on your own,” Grillo said.

In any given year, the race field between 30 and 40 teams. One of the benefits is that if you have enough runners for a team, race organizers will deliver shirts and bibs to a team organizer, so runners don’t have to show up to collect their own at the event. Race Committee member Tim Mosa said that teams help market the race.

Grillo has t-shirts made for the McAuliffe team, in addition to the shirts provided by the race. Last year, the school used a font like the one used for the band Metallica, for the McAuliffe shirts. The bright blue shirts and lettering stand out among the crowd.

Run Seal Beach has had up to 6,000 runners in past years. In the race’s 45-year history, it has distributed more than $1.8 million in grants to schools and community organizations. Runners registering for a team get a discount. The cost goes up from $35 to $40 after Feb. 27.

Grillo is in his sixth year teaching at McAuliffe. Having grown up in Seal Beach, he attended McAuliffe and graduated from Los Alamitos High. This is his fifth year leading the organization of the McAuliffe team, having taken over for teacher Valerie Miller, who led the team for many years. Trying to top 180 participants will be a challenge, but Grillo is reminding students that they can extend the challenge to others as well.

“It’s not just for students, get everybody,” Grillo tells his students. 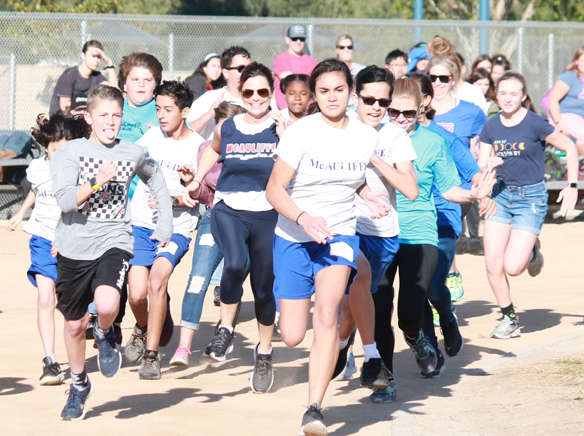 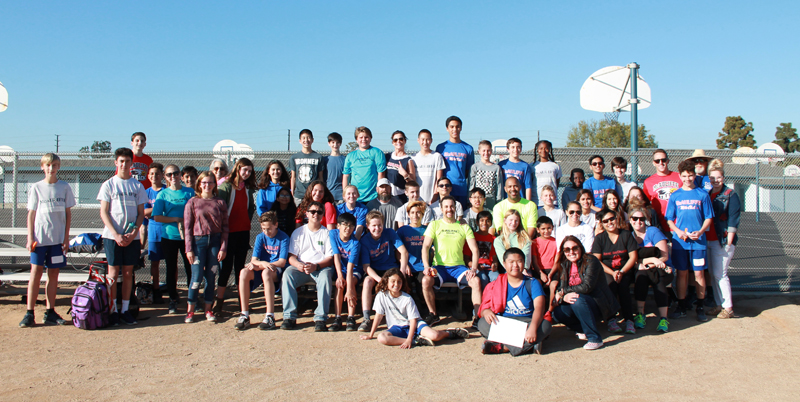