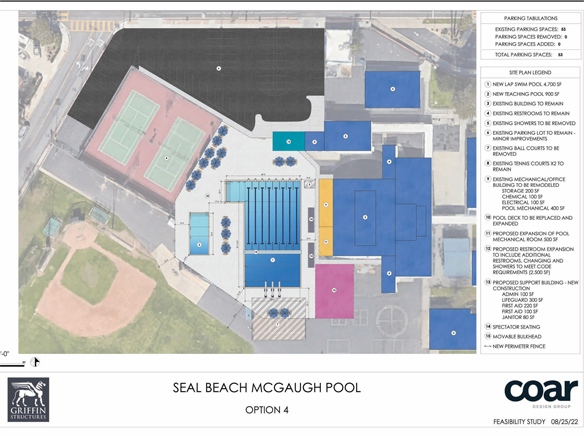 (Another consulting firm made the same recommendation to the Seal Beach City Council in 2008. At the time the estimated cost of replacing the pool was about $5 million. For a history of the community pool project, see “Seal Beach swimming pool project: a chronology of events,” at www.sunnews.org.)

The committee also looked at five potential options for a new pool. The meeting was held last Wednesday, Sept. 14, after the Sun’s deadline.)

Committee members raised concerns about parking, costs, and the possible inclusion of two pickleball courts in two of the five proposed options for replacing the pool.

Marine Safety Chief Joe Bailey questioned whether replacing a wading pool with a similar “teaching pool” was the best use of the space.

The cost estimates of the proposed options for replacing the McGaugh pool ranged from about $12.8 million to almost $17.3 million. (These Sun rounded the numbers.) Those figures were based on expected construction costs and contingencies for construction and other services.

The figures did not include the annual cost of maintaining a finished swimming pool.

Near the end of the meeting, Assistant City Manager Patrick Gallegos told the committee that city staff would get into the funding options for the pool project at another time.

According to the presentation by the three consulting groups, problems with the current McGaugh pool include: its age, it doesn’t meet current code requirements, the deck is degraded, the signage isn’t adequate, the recirculation pumps are antiquated, concrete degradation/corrosion in the mechanical room, pool filter leaks, and the challenges of a combined city/school district facility.

The consultants recommended replacing the main pool and the small wading pool at the location.

Griffin Structures was hired in April 2022 to do a feasibility study to determine if the McGaugh pool could be “revitalized or re-envisioned.”

Matt Kingdom of Coar Design Group, described Option 1 as the baseline option: a new deck, a new pool, a new pool shell, restrooms to meet code requirements, and ideally the pool would be separated from the school.

The following each of the five options presented to the pool committee:

The mechanical room would be expanded. This option, according to the slide presentation, would assume storage would be located behind the tennis courts.

A teaching pool would replace the smaller pool on the site.

The teaching pool’s functions would include teaching and recreational swimming.

Option 2 would also be a six-lane, 25-yard competition pool and would also include a small teaching pool. Uses of the main pool: water polo, lap swimming and recreational swimming.

The teaching pool’s functions would be limited to teaching.

The mechanical room would be expanded. There would be restrooms dedicated to the aquatic facility, the entrance would be enhanced and the handball courts currently on the site would be removed.

Option 3A would be a six-lane, stretch 25-yard competition pool.

A teaching pool would also be part of the facility. The teaching pool’s functions would include teaching, lap swimming, and recreational swimming.

Diving wasn’t included in Option 3A.

Additional parking was included in Option 3A.

Changes to the current site would include: expanding the mechanical room, restrooms dedicated to the aquatics facility, and removing the handball courts.

One of the three existing tennis court would be removed and replaced with two pickleball courts.

Like 3A, Option 3B changes to the location include an expanded mechanical room, dedicated restrooms, additional parking, an enhanced entrance, would remove the handball courts, and would replace a tennis court with two pickleball courts.

The teaching pool would be used for: teaching, water polo, lap swimming, recreational swimming, and diving.

The site would be changed to expand the mechanical room, add dedicated restrooms, an enhanced entrance, remove the handball courts and remove one tennis court.

However he also said that having the teaching pool was not the best use of the space.

District Three Councilman Mike Varipapa was concerned that the configuration for Option 2 would make it difficult to access the gym.

Varipapa said the configuration of Option 3B would lose parking spaces.

He asked how the city would maintain the pickleball courts at the tennis center.

Marine Safety Chief pointed out that there would be a staff person in the office at the entrance.

Varipapa suggested that a notice be sent to residents living near the location. He wanted their input because pickleball is loud.

District One Councilman/Mayor Joe Kalmick suggested moving the pickleball to the bottom of one of the proposed designs.

“I would just really hate to see it overrun by pickleball,” Varipapa said.

During the discussion about Option 4, Varipapa asked if it was desirable to have a toddler pool.

Bailey said he liked multiple use pools. He said he had been looking at expanding the city’s swimming lesson program.

He said there were ways to work around not having the teaching pool.

According to Bailey, there were other things the city could do that were more cost effective than having a teaching pool.

“Whatever the cost is—this has to be sold to the community,” Kalmick said.

Kalmick also said you can’t teach children to swim in the ocean.

Varipapa said diving was not a necessity.

“We as a city need to decide what we’re shooting for,” Bailey said.

The pool project may be part of the City Council Tuesday, Sept. 20, strategic planning meeting. Details of the meeting were not available before the Sun’s deadline.