Recent Letters to the Editor of the Sun have debated a proposal that Main Street be reopened with the streets closed to car traffic. At least one variation on the idea has appeared on local social media.

The status of the proposal is unknown. During a recent Zoom interview with local Realtor Nat Ferguson, District One City Councilman Joe Kalmick said there was “a kernal of an idea” in the proposal.

“I have issues with both sides of the argument. First, let’s close the street to auto traffic. As much as l like al fresco dining and in light of those parking spaces being lost, what is the alternative for parking for people who love to walk Main St. Perhaps we should let the businesses on Main St. recover and reestablish their clientele. Then we can talk about alternative parking solutions.”

District Two Councilman Thomas Moore wrote: “There seems to be a lot of community support for opening Main Street to foot traffic, but I understand there is more to it and more complex than people think in regards to liquor licensing, parking considerations and more. I’d like to hear what the businesses on Main sStreet feel about it and what the City has to say on what hurdles are involved. If there is overwhelming support by the businesses and it makes sense (in regards to parking and licenses), then I would be supportive of something like this.”

Assistant City Manager Patrick Gallegos wrote: “The City has been working closely with the Seal Beach Chamber of Commerce to provide resources and gain input from businesses. We look forward to continuing these discussions and evaluating options provided by businesses and residents to lead the business community towards economic recovery.”

The public has until June 22 to comment on the draft environmental impact report for the Los Cerritos Wetlands Restoration Plan.

“The proposed program identifies conceptual restoration designs for approximately 503 acres of land located on the border of Orange County and Los Angeles County in the cities of Seal Beach and Long Beach,” according to the project summary of the 86-page document.

For the month of May, the Seal Beach Yacht Club will collect donations for the WomenShelter in Long Beach, which provides housing and support services to domestic violence victims and their children.

“As I became commodore I wanted to highlight a nonprofit charity each month,” wrote Yacht Club Commodore Laura Ellsworth in a recent email.

“For May we are collecting for the women’s shelter,” Ellsworth wrote.

She credited club member Joan Palango with the idea.

“It made total sense to me since we have all cleaned up our closets because of the stay at home mandate,” Ellsworth wrote.

“I noticed that the postcards aren’t coming to the house of each organization that is doing curbside pickup,” Ellsworth wrote.

“At the same time I have been hearing on the news that domestic violence with the stay at home order is on the rise,” Ellsworth wrote.

Some communities have reported increases in domestic violence, yet law enforcement agencies in other communities are reporting decreases.

Ellsworth will have a box in front of her house to collect donations for the WomenShelter in Long Beach.

“Towards the end of the year we will probably do a collection of some level for Laura’s House on Catalina,” Ellsworth wrote.

“Those workers there as you know are having a rough time with the shut down of the island.   Other yacht clubs have stepped up to help,  but once that calms down I think we may take a turn after the season perhaps for Christmas,” Ellsworth wrote.

The City of Seal Beach had 13 confirmed (cumulative) cases of COVID-19 as of Monday, May 12, according to the County of Orange.

The county reported 230 patients were currently hospitalized as of May 12. Of that number, 100 were reported in the intensive care unit. 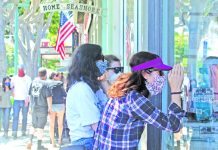 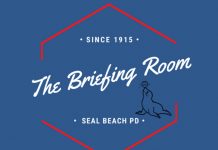 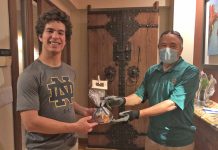