Editor’s note: This week’s Seal Beach Crime Log is based on eight detailed versions of the log and one summary version, totaling 216 pages that were provided by the Seal Beach Police Department. It is not possible to list all incidents or arrests.

• Petty Theft Report (Priority 2)—5:45 p.m.—Pacific Coast Highway—The caller, watching from his car, believed he saw a man tampering with a lock on a bike on a bike rack. As of 5:48 p.m., the caller said the other man had some kind of a tool, possibly a Swiss Army knife. The caller asked the man if it was his bike and the other man told the caller to go ahead and phone the police. As of 6:57 p.m., police determined that the bike the other man had possession of was actually his bike.

• Traffic Hazard (Priority 2)—1:36 p.m.—Lampson Avenue and Seal Beach Boulevard—A tree fell on a van. According to the log, a tree branch snapped and broke off. The driver was still inside the van. The reporting person checked to see if the driver was OK. The driver apparently refused any assistance. As of 1:39 p.m., police said Public Works needed to cut up a large branch. Report taken.

• Traffic Hazard (Priority 2)—6:05 p.m.—Coastline Drive (the Hill)—The caller said car parked in front of the locations had side extensions pulled out that were creating a potential hazard. The caller said she almost hit the parked car. She also said there was a power cord coming from the car. As of 6:20 p.m., police contacted the owner who agreed to pull in the slides and the cord.

• Municipal Code Complaint (Priority 3)—7:45 p.m.—Ocean Avenue (Old Town)—The caller reported a man and woman with fishing poles walking toward the end of the Seal Beach Pier. They moved a sign as well. As of 7:56 p.m., police had advised/warned/counseled two individuals concerning the municipal code. Police checked the pier for two more individuals.

• Patrol Check (Priority 3)—9:08 p.m.—Pacific Coast Highway—The caller said a woman caused a verbal disturbance over having to wait in line outside the store and made what the caller apparently described as vague threats. The caller did not want contact with police. The police contacted the woman in question, who was upset that she was not allowed to enter the store due to the store’s capacity with 15 minutes left before closing. She was sitting in the parking lot, writing an

email to the store’s corporate headquarters. Police advised her to have no further contact with store employees that night.

• Arrest—12th Street and Pacific Coast Highway—Police arrested Timmothy Lee Rodrick on suspicion of possession of an open container of alcohol in public.

• DUI Arrest (Priority 2)—1:48 p.m.—Main Street—The caller reported a man in a car located in the alley with an empty bottle in his lap. As of 1:50 p.m., the man reportedly had a verbal dispute with the caller and his friend. The man drove off, going southbound through the alley. As of 1:51 p.m., he turned eastbound in the alley just before the municipal parking lot. As of 1:52 p.m., he was going westbound on Central, headed toward main, and was reportedly blowing stop signs. As of 2:32 p.m., police apparently had the driver in custody. Police arrested John Charles Rew on suspicion of driving under the influence of alcohol.

• Patrol Check (Priority 3)—2:23 p.m.—Surfside Avenue—Approximately 100 people were reported on the beach. They reportedly had animals with them. As of 2:59 p.m., police apparently found residents on the beach. They were advised/warned/counseled against being on the beach. (Local beaches in Seal Beach were closed until sunrise, Monday, May 11. Since that time, they have been open from sunrise to sunset, provided they are engaged in physical activities.)

• Patrol Check (Priority 3)—2:29 p.m.—Pacific Coast Highway—An anonymous caller said she saw a large group of people inside a room at the location. She told police they were having a party, possibly in violation of COVID-19 restrictions. As of 2:46 p.m., police found employees and a couple of customers inside the business. They were practicing social distancing.

• Counseling (Priority 3)—10:22 p.m.—Elder Avenue—The caller heard a loud noise outside her front door. She said it sounded like a child but believed it was some type of animal. She was afraid to open the front door. She also tried to call Long Beach Animal Care Services, but they were closed. Her husband tried to take a picture of whatever was making the noise. The caller speculated the cause might be two cats. As of 10:37 p.m., police confirmed the presence of cats. No further law enforcement services  were required.

• Patrol Check (Priority 3)—8:50 a.m.—Pacific Coast Highway—The caller reported a car show with approximately 40 individuals present. The caller said they were not wearing masks. The caller reported feeling threatened because they would not move for him to go through. Police found eight individuals, all practicing social distancing and all wearing face covers.

• Welfare Check (Priority 2)—8:47 a.m.—First Street and Ocean Avenue—The caller reported a transient man in a wheelchair. The caller believed he might need help. He had been on the sidewalk all night and he was shaking a lot. As of 8:52 a.m., he refused services. No medical assistance needed. He was cleaning up and moving along.

• Patrol Check (Priority 3)—7:52 p.m.—Ocean Avenue and 13th Street (Old Town)—The caller reported 12 kids running up and down the alley and throwing balls against the wall. The kids were making excessive noise as well. Someone’s mother came out and got the kids before police arrived.

• Car Burglary (Priority 3)—8:48 a.m.—Medinac Lane (Leisure World)—The car was in the carport. The burglar’s point of entry: unknown. The log did not provide any information about what might have been lost.

• Arrest (Priority 2)—12:08 p.m.—Seal Beach Boulevard—The caller said a man in the store had high priced items in his car and was acting suspicious. As of 1:02 p.m., police had arrested Osman Martinez on suspicion of attempted shoplifting. Based on a warrant, he was also booked for failure to appear in court concerning a charge of being an accessory after the fact of a felony.

• Welfare Check (Priority 2)—3:45 a.m.—Seal Beach Boulevard—The caller said a man appeared to be sleeping or drunk in a car parked in the front lot off of Seal Beach Boulevard. The car’s engine was running. As of 4:37 a.m., police had arrested Stephen Daniel Payen on suspicion of possession of illegal drug paraphernalia and suspicion of possession of a controlled substance formerly classified as narcotics. Police had his car towed. 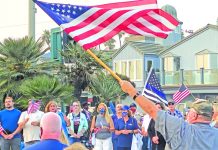