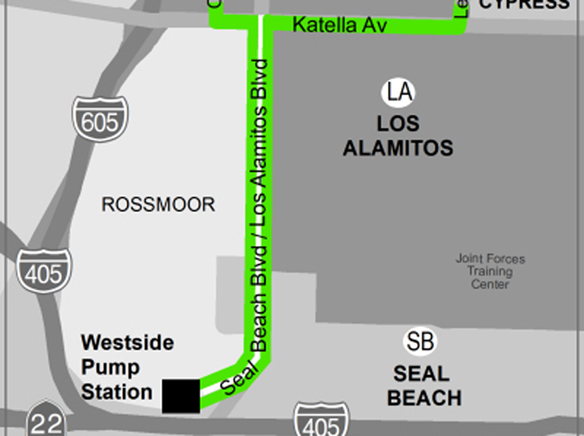 The Los Alamitos city council received a briefing from the Orange County Sanitation District about a trunk line sewer rehabilitation project that will disrupt traffic for approximately 10 months or longer.

The massive trunk line rehabilitation project will include areas of Los Alamitos and Seal Beach, Kathy Milliea, Director of Engineering, told the council this past Monday.

“We understand the inconvenience, Milliea told the Council, saying the project team at OCSD is prepared to utilize a variety of outreach mediums to keep residents notified once the project begins.

Outgoing Mayor Richard D. Murphy, who served for four years on the board of the OCSD, said “without a doubt, it is the number one sanitation district in the world. People come from all over the world to study how it’s done in the Orange County Sanitation District.”

Milliea explained that there are two major sewer trunk lines running down either side of Los Alamitos/Seal Beach Boulevard that feed sewer discharges to either of two treatment plants, one in Fountain Valley, the other in Huntington Beach.

“For some reason,” said Milliea, the district gets calcium buildups in the joints of the pipe only in this area. The calcium deposits build up in the lines and must be periodically cleaned.

The calcium “restricts capacity on this line and if not cleaned, will “tear up equipment.”

Therefore, she said the district will go out for bid on the project early in 2021 and they expect to award the bids in April, with construction projected to begin in the summer of 2021.

Each joint will be “air tested,” she said, meaning that if air is found to be escaping from any part of the joint, this means water can get in and with it, bring more calcium.

She said the specialized equipment will be able to fix the joint underground. Only in rare cases will it become necessary to “tear up the concrete” to dig down to the joint, said Milliea.

Milliea said the district has already begun the outreach to the broader community, seeking their opinion on the best times to perform the work.

Quite naturally, she said residential areas want the work to be done at night to cut down on noise while business communities wanted the work done during the day so that traffic to their businesses would not be impeded.

“We are supportive of our communities,” said Milliea, and “we understand the impact.”

Therefore, she said the district reached a compromise of sorts, work will proceed during the night for the stretches of work near Rossmoor and during the day when the work moves closer to the business community in Los Alamitos.

“Seal Beach was quite clear,” said Milliea, “they want all of the work to be done at night.”

Daisy Covarrubias, who will head the outreach for the sanitation district, briefly explained how the district planned to use email, web, letters and social media to keep residents notified once the project is underway.

She said residents will be able to sign up for email updates.

Council member Shelley Hasselbrink asked Milliea to consider issuing a weekly advisory similar to those being issued by construction workers on the 405 Freeway, while Mayor Pro-Tem Mark Chirco asked them to consider using video or other media easier for some residents to consume.

“The good news,” said Milliea, “once this is done, you won’t see us again for another 50 years.”