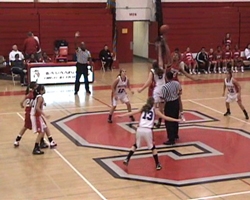 The Griffins finished with three wins and one loss for the week.

The stronger Indians sent several Griffins crashing to the floor and to the sidelines with hard nosed play that tested Los Al’s resolve throughout the game.

The Lady Griffins answered with a suffocating defense and solid inside scoring.

This in-the-paint scoring was crucial as Los Al was 0/14 from the 3-point line.

The teams stayed close to each other throughout the game with Los Al leading by one point at the first quarter, the half, and by two points at the end of the third quarter, 26-24.  The final period would decide the contest.

Griffin Senior Shelby Schiada exploded in the fourth quarter scoring all of her 6 points and grabbing four of her team-high seven rebounds, along with two steals.

Los Al outscored the Indians 21-14 in the period to close out the victory.  Senior Tess Wianecki, spelled by Sophomore Lauren Yamada, provided lock-down defense on Fullerton ’s top scorer, Dominique Richardson, holding her to three of 16 shooting from the field.

Forty-seven percent of Fullerton ’s points came from the charity line as they were only able to muster 10 field goals from the floor.

In earlier contests, the Griffins defeated their first opponent, St. Joseph of Canada in a non-CIF game, 48-39.   Los Alamitos led from the onset and stayed in front of Canada throughout the match.  Los Al employed their bench extensively and Sophomore Lauren Yamada was the Griffins high scorer with 16 points.

Their second opponent, Valencia , provided a much harder challenge as they defeated the Griffins 55-49.

Los Al stayed within two points throughout the game and the contest was in question until the end.   High scorers for Los Al were Lynn Higashigawa with 14, Tess Wianecki 8 and Natalie Richard’s 7 points.  Richards and Wianecki pulled down 9 and 6 boards, respectively.

Los Alamitos defeated Sierra Vista , 58-43 in their third game.   From the tip-off, the Griffins ran to a 15-1 advantage and the outcome was never in doubt.  Los Al held a 14 point halftime lead and extended it to 22 for the final quarter.

It was raining three pointers for the Lady Griffins with Junior Lynn Higashigawa making 4, Junior Chelsey Honma 1, Senior Karen Mizoguchi 1, Senior Jennifer Montoya 1, and Senior Tess Wianecki 1.   They were 8/17 from the 3-point line.