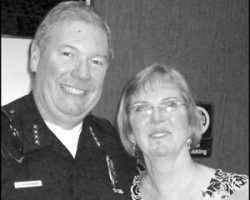 On Wednesday, June 30, after 22 years with the Seal Beach Police Department, Senior Community Services Officer Helen Kling retired, according to a statement issued by Lt. Bob Mullins, third in command of the SBPD.

Police department staff successfully pulled off a surprise luncheon for Kling on her last day.

With her family and most of the Police Department present, she was presented with an encased badge—the very badge she has worn for the last 22 years.

She also received a Chief’s Award for meritorious service to the city of Seal Beach and the department.

“Helen’s petite shoes will be hard to fill as she begins her life’s next chapter,” said Chief Jeff Kirkpatrick. “We will miss her greatly and wish her well.  Congratulations to Helen Kling upon her service retirement!”

Kling has been employed by the city since July 1988.  During her tenure with the SBPD, she has served in a variety of assignments, including parking control, property and evidence clerk, records clerk and most recently as the court liaison officer.

For the third time in his career, Seal Beach Police Officer Al Cabrera was named O.C. Auto Theft Recovery Officer of the Year 2009 on Thursday, June 24, 2010.

Cabrera was one of 27 Orange County police officers so honored by the Auto Theft Advisory Committee, a partnership between law enforcement, insurance and automobile-related companies to reduce auto theft.

The committee is a subcommittee of the Western States Auto Theft Investigators Association, Southern Chapter.

The committee held its 20th anniversary awards presentation brunch on the last Thursday of last month.

Bike Stop—6:58 p.m.—Pacific Coast Highway—An individual was arrested on a $1,500 warrant out of Santa Monica.

Suspicious Circumstances—2:09 a.m.—Electric Avenue—Someone rang the caller’s doorbell six times and then left. The caller was not expecting anyone. The caller didn’t want contact with the police. The caller simply requested a patrol check of the area.

Counseling—5:34 p.m.—Marina Drive—Someone used a fire extinguisher to spray a vehicle and then broke the fire extinguisher. The affected vehicle left prior to the arrival of a police unit. No suspect information.

Disturbance—3:10 p.m.—Electrical Avenue—The caller said man on a bike ran into the caller and her dog. Neither the woman nor the dog was injured. The caller said she pushed the man away. He asked if she was on drugs and she ran into the library because she was scared. She told police that the man was still in the Mary Wilson Library and could point him out.

The parties were apparently counseled. At 3:34 p.m., police unit 111 determined that no further police services were necessary.

Disturbance—3:22 p.m.—Seal Beach Boulevard—Someone from Kohl’s called police to report that a woman who had allegedly stolen something was yelling and refusing to listen to loss prevention (store security) personnel.

She was not detained and apparently left the store.

After a brief search, a woman was taken into custody and arrested for grand theft and for receiving stolen goods.

Disturbance—1:05 a.m.—Ocean Avenue—The caller said 15 teenagers were near Ruby’s on a boat loader, drinking alcohol and jumping in the ocean. Police unit 123 cited two individuals for smoking. Police did not find any evidence of alcohol violations.

The suspect reportedly had a vehicle waiting outside the business.

The crime apparently occurred between 10 a.m. and noon.

Pedestrian Check—12:32 p.m.—1st Street and Pacific Coast Highway—Police unit 117, while on duty, interviewed a pedestrian in the field. The individual was cooperative.

Drunk—5:15 p.m.—Central and Main—The caller said a drunk man was stumbling around prior to sitting down. However, while the police found that the man had been drinking, the police found no evidence of public drunkenness. He was sent on his way and left the area.

HazMat Spill Reported—11:53 a.m.—Clipper Way—The caller said a white substance was flowing out of a residence and into the gutter. The caller thought the substance might smell like a solvent. Police checked. Police unit 1S5 advised that the white substance was from a substantial paint spill that was flowing onto Clipper Way and out on to Electric Avenue. The Seal Beach Police Department paged the Public Works Department.

Harassing Call Report—8:27 a.m.—St. Andrews Drive, Mutual Unknown—A Leisure World woman had been receiving telephone calls for three days from a man. The caller believed the calls were related to a scam. On Tuesday, June 22, he apparently gave her a telephone number to call. Counseled.