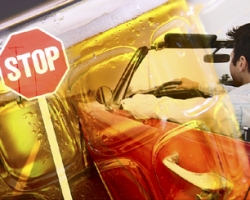 The City Council agreed to accept the grant as part of the agency’s Monday, Nov. 9 consent calendar.

According to the staff report by Seal Beach Police Chief Jeff Kirkpatrick, the Police Department applied for $44,038.88 in funds primarily from the California Office of Traffic Safety to conduct eight sobriety checkpoints in Seal Beach.

“Although the city enjoys a low crime rate, the issue of Driving under the Influence of drugs and/or alcohol continues to be a problem affecting all areas of the city,” Kirkpatrick wrote.

Under the terms of the grant, Seal Beach will have until Sept. 6, 2010 to conduct eight sobriety check points.

That same night, the council accepted the donation of a Polaris Ranger utility vehicle for use by the SBPD. According to Kirkpatrick, the vehicle would be used during emergencies and for summer beach patrols.

The Ranger was donated to the city from the U.S. Smokeless Tobacco Company’s Operation Ranger program.

As the end of the year approaches, the Sun Newspapers has begun compiling the more interesting (and, yes, amusing) crime stories of 2009.

We’ve already written up the January and February 2009 selections, so hurry if you want to nominate a Crime Log entry for the 2009 end of year log.

Citizen Assist—10:14 a.m.—Ocean Avenue—The caller asked for a parking officer to deal with vehicles in the parking lot. A crew was setting up berms with heavy equipment and needed the area cleared. The registered owners were contacted and the vehicles were removed.

Traffic Stop—12:42 p.m.—Old Ranch Parkway—During a traffic stop, police unit 111 took a woman into custody for giving  a false identity to an officer. It turned out she was wanted on two warrants out of Long Beach, one for violating the California Vehicle Code and the other for theft. According to the log, she was cited and released.

Suspicious Person—11:51 a.m.—Dogwood Avenue—A man who said he was from the gas company was going door-to-door, asking to inspect people’s attic insulation. The caller contacted the gas company and was told they did not know anything about the man. He was described as a Hispanic man in his 30s, possibly wearing a ponytail, last seen wearing a blue work shirt.

Petty Theft Report—2:31 p.m.—1st Street—Someone stole pictures off of a wall at the location.

Scavenger—9:40 a.m.—5th Street and Central Avenue—A white man described as 60 years old was reportedly digging through the trash in the alley between 5th and 6th streets. He was advised to discontinue and told police he would comply.

Found Property—6:06 p.m.—Seal Beach Boulevard—According to Seal Beach Police Sgt. Steve Bowles, the department’s public information officer, a customer in a store found a fanny pack that contained a gun. Store security locked up the property. According to the Crime Log, the fanny pack also contained an identification card. The name on the card was redacted, blacked out, in the Crime Log. Bowles said that ultimately it turned out the fanny pack belonged to an off duty law enforcement officer. He was contacted and the gun was returned to its owner.

Suspicious Circumstances—11:38 a.m.—Seal Beach Boulevard—The caller said his wife was leaving a store when she was asked to sign a petition to legalize marijuana. When she declined, the young men with the petition asked if she would like to buy marijuana. The caller could offer no further description of the suspects. Message delivered to beat unit.

Forgery—12:06 p.m.—Seal Beach Boulevard—The manager of a business phoned police to report that a man and a woman attempted to buy alcohol with a stolen credit card. According to Sgt. Steve Bowles, public information officer for the Seal Beach Police Department, the couple used a forged gift card. Store security followed them out of the store and up Seal Beach Boulevard. They pulled into the Vons parking lot to evade their pursuers, where they were arrested by Seal Beach and Los Alamitos police officers.

Petty Theft in Progress—3:34 p.m.—Seal Beach Boulevard—Store security phoned the Seal Beach Police Department to report a petty theft in progress. Police arrested two suspects. One was cited for petty theft and released in the field. The other suspect was arrested for business burglary.

Suspicious Circumstances—3:34 p.m.—Pacific Coast Highway and Seal Beach Boulevard—The caller found a bike next to the fence surrounding the Seal Beach Naval Weapons Station. The caller didn’t see anyone near the bike and thought someone might have gone over the fence. Message delivered to the Navy base.

Burglary Alarm—6:38 p.m.—Coastline Drive—The alarm was accidentally set off by the housesitter.

Transient—2:40 p.m.—Farquhar and Los Alamitos—The caller said a man was approaching children to ask for money. Police found the man and got him to leave the area.

The caller was not sure what was in them. Officers referred the matter to the Orange County Fire Authority.

Disturbance—1:39 p.m.—Howard Avenue—Possible physical fight between a male and female. Officers found a brother and sister.

They were counseled and one of the siblings left the scene.

Missing Juvenile—4:43 p.m.—Reagan Street—A male juvenile ran away from his residence a few minutes prior to the call to the Los Alamitos Police Department. The boy came back about an hour later saying he wanted to take a walk. He was counseled.

Loud Music—1:35 a.m.—Reagan Street—The caller heard “boom, boom” and then nothing. Officers found a stereo playing lyrics that had boom, boom in them.

The people responsible for the stereo turned down the stereo.

Warrant Arrest—10:05 p.m.—Wallingsford Road—Orange County Sheriff’s Department deputies attempted to serve an arrest warrant. However, no one was home.

Suspicious Person in Vehicle—12:25 p.m.—Yellowtail Drive and Foster Road—An individual was seen sitting in a vehicle.

There was no crime. The individual was working in the area.

Disturbance, Music or Party—8:38 p.m.—Yellowtail Drive—The host of a party wanted assistance in clearing the house of 50 Juveniles.  One juvenile was found to be intoxicated.  Paramedics responded and transported the juvenile to a hospital.  The juvenile’s mother responded.

Suspicious Person or Circumstances—8:08 p.m.—Bostonian Drive—An unknown person knocked on the caller’s door and asked for someone who lived down the street. No crime.

Suspicious Person or Circumstances—4:14 a.m.—Harrisburg Road—The alarm was activated in a  family home. The caller requested a check of the residence.  Secured.