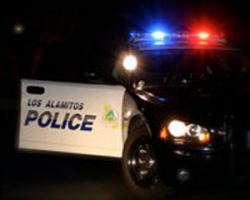 The Los Alamitos Police Department recently reminded the public not to leave children or pets in locked cars on the agency’s blog.

“This past week, the police department responded to three separate incidents of children and/or pets left unattended in a locked vehicle,” said the unsigned oneline article.  “Fortunately, no injuries were sustained and vigilant citizens were proactive in calling for help.  Leaving small children and pets unattended in vehicles can lead to disastrous results.

“Each and every year during the summer months or when temperatures rise above normal, first responders are called upon to rescue children and pets who have been left in locked vehicles with little to no ventilation,” the website said.

“Even on mild days where the ambient temperature is 72 degrees, the interior temperature of an unventilated car with its doors closed and windows rolled up can rise more than 30 degrees within 30 minutes.  Imagine how this is magnified when summer temperatures and high humidity reach their peak.  Vehicles often have a greenhouse effect,” the website said.

“If you see a child or pet in an unattended locked car call 9-1-1 immediately,” the website said.

Municipal Code Violation—6:39 a.m.—Fifth Street and Pacific Coast Highway—The caller said there was an on-going problem with a work crew using leaf blowers in a parking lot. The caller wanted them cited. Police unit 107 contacted the crew’s supervisor and advised him about the municipal code. The supervisor said he would brief all the employees not to use the leaf blowers before 7 a.m. and that work would resume after 7 a.m.

Suspicious Circumstances—11:06 p.m.—12th Street and Landing—A man with a clipboard was at a truck and appeared to be loading something. The caller thought this was suspcious, due to the hour. Police determined that the truck was delivering a mattress. No further police services were necessary.

Vandalism Report—7:59 a.m.—Catalina Avenue—The caller said someone threw a water melon at the caller’s car, causing damage to the rearview mirror. The caller did not desire a report, but the caller did want the police to be aware of the incident. Log entry.

Vehicle Burglary—5:14 p.m.—Seal Beach Boulevard—Someone smashed the driver’s side window of  the caller’s car and took a backpack. Report taken.

Suspicious Person or Circumstances—9:08 a.m.—Wallingsford Road—The caller wanted to speak with a deputy concerning drug paraphernalia found on the property.

Disturbance—6:59 p.m.—Tucker Lane—The caller asked for the police. The caller said there was a family dispute. When dispatch called back, there was a busy signal.

Citizen Assist—9:47 p.m.—Mainway Drive—The caller said a large tree branch fell from the parkway and was blocking the caller’s driveway. The caller said it was 20 feet long and approximately 12 inches in diameter.

Suspicious Person or Circumstances—11:15 p.m.Wembley Road—The caller heard noises in her backyard and thought there was someone out there. The caller did not want to look outside to see what or who it was. The caller’s son was reportedly in front of the home, talking on the phone to avoid disturbing his sleeping parents. He said he saw a raccoon running around on  the sidewalk. The raccoon was possibly in the back yard making noise.

Open Window—2:27 a.m.—Tucker Lane—The caller said he just found his window open and thought someone had broken in. All the lights were turned off in the back. The log described the caller as rambling.

The caller said he had tenants that he was trying to evict at the location and thought the tenants were responsible for the open window.

The caller kept saying that the tenants were burglars, neo-Nazis, counterfeiters, etc. There was a pit bull at the residence. The caller said he would put the dog away.

Suspicious Person in Vehicle—7:40 a.m.—Mainway Drive—A deputy performed a patrol check in front of the location in search of a van with no windows except in the front. The van was occupied.

The caller thought that the man in the van had dropped off other individuals who were passing out newspapers.

The caller said they were unknown to the area.

Burglary Report—10:58 a.m.—Christy Lane —The log did not say if this was an automobile or residential burglary.

Found Property—3:34 p.m.—Blume Drive—The caller found a wallet in a bathroom and contacted Rush Park staff, who believe it was left by a customer.

Citizen Assist—6:19 p.m.—Montecito Road and Woodstock Road—The caller was walking his dog when a neighbor who had a restraining order against the caller walked by with that neighbor’s wife. The caller said he crossed the street to avoid them, but they told the caller they would call law enforcement.

Disturbance, Automobile—6:43 p.m.—Druid Lane—The caller reported two individuals racing their Harley Davidson motorcycles up and down the street. The caller thought they might be working on the bikes and were road testing them.

Suspicious Person or Circumstances—11:27 p.m.—Martha Ann Drive and Salmon Drive—The caller saw an unknown man walking back and fourth by his vehicle, which was parked next to the ditch.

Suspicious Person in Vehicle—12:56 p.m.—Foster Road and Yellowtail Drive—A deputy searched for three men who were seen passing out fliers in the neighborhood. The caller said they were not familiar. They were last seen in a four-door vehicle leaving Foster Road in the direction of Yellowtail Drive.

Suspicious Person in Vehicle—1:27 p.m.—Woodstock Road—A deputy searched for a man who was going door to door. The caller said he was unknown to the area.

Suspicious Person in Vehicle—1:31 p.m.—Donovan Road—A deputy performed a patrol check for a white vehicle that was occupied.

Suspicious Person in Vehicle—7:42 p.m.—Tigertail Drive and Christy Lane—A deputy performed a patrol check of the area for a vehicle that was occupied by a woman, with a boy walking along the sidewalk area of Brimhall and Tigertail.

Suspicious Person in Vehicle—7:58 p.m.—Pemberton Road—The caller said a four-door sedan was unknown to the area. The caller did not know if the vehicle was occupied.

Suspicious Person in Vehicle—8:41 p.m.—Brimhall Drive—A deputy searched for a man and a woman in a four-door vehicle with an unknown license plant number that was parked in the library lot. The caller said they were not known to the area.

Suspicious Person or Circumstances—4:48 p.m.—Davenport Road—The caller saw an individual go into a neighbor’s back yard. Two individuals were leaving in a large, reddish SUV.

Unknown Trouble—8:21 p.m.—Tucker Lane—The caller said her grandfather was pointing a gun at her.