The family held a private party on Sunday, Aug. 1, in Los Al. Everyone was vaccinated against COVID-19, according to their son Robert Baldridge. “After 70 years together, they remain deeply in love and even still hold hands,” Robert wrote in a recent email. 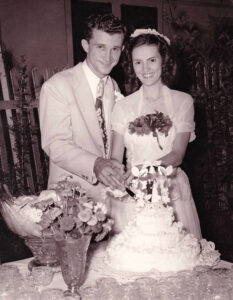 The following is a brief biography provided by Robert:

“Bruce Baldridge was born in Houston, Texas on February 1, 1929. Ruth Cooksey was born in Galveston, Texas on June 20, 1930. Bruce enlisted in the U.S. Navy at the age of 17 and was honorably discharged two years later to attend college at the University of Texas.

“He met Ruth, a bank teller, at a church event in Houston in early 1951 and they were married six months later, on August 2, 1951. Upon graduating from college and earning his CPA in accounting, Bruce worked for the Western Natural Gas Company in Houston as the Assistant Controller.

“He and Ruth had four children by the time they moved to California in 1963, where Bruce accepted an accounting job with Petrolane, Inc., an international petroleum gas company headquartered in Long Beach, where he worked until his retirement. Ruth worked at being the best mother and wife possible, which she excelled at, while Bruce worked his way up at Petrolane to become its Executive Vice President. As noted, after 70 years together, they remain deeply in love.

They are committed not only to each other but to the four children, nine grandchildren, four great grandchildren, and many other extended family members and wonderful friends that have been a part of their lives together.”