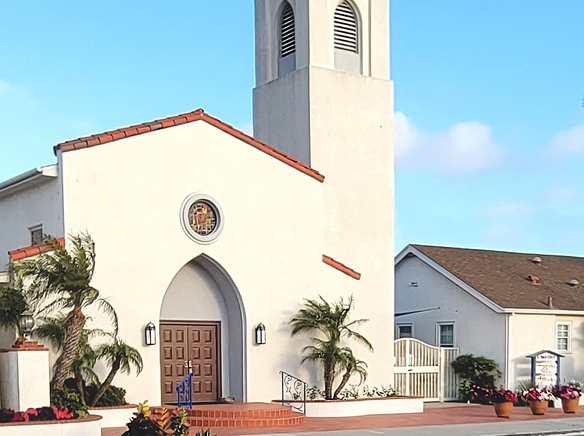 By Barry A. Kunz, Pat Kearns, and Donald Miller

St. Anne’s Catholic Church began one-hundred years ago when a small mission church was established in Seal Beach in 1921 by Father Thomas Morris, pastor of St. Matthew’s in Long Beach.

Mass was first celebrated there in a temporary building, a grain warehouse, on Electric Avenue near Main Street.

Throughout 1922, Father Fleming, both parish priest and a carpenter, began the construction of a new church on property purchased in Seal Beach.

With the support of local parishioners, plus a generous Chicago woman who donated $1,000 and asked that the parish be dedicated to Saint Anne, the small church was erected at 317-319 10th Street.

During his six years of service, Father Raley’s social and clerical attainments added much to the civic and parochial life of Seal Beach.

In May of 1936, when the new Archdiocese of Los Angeles was established, Father Christopher Bradley was appointed pastor of St. Anne’s.

When the parish began to outgrow its little church, Father Bradley traded the two lots on which the church stood on 10th Street for two lots across the street, where the present church stands today.

His 15 years in that role permitted him to buy five more lots south of the church and provide the only private parking lot of any size in town.

By July of 1944, the establishment of what was then known as the Naval Ammunition and Net Depot saw beach homes and buildings give way to naval piers and jetties as well as crops of new homes and a shopping plaza.

As a seasoned Navy chaplain, he continued with more parish improvements, including the installation of the bell tower.

With the increasing demand for pastoral services, the old rectory was remodeled to double its size.

Father William Diamond’s 10-year tenure began in 1962, and with the onset of construction of the nearby community of Huntington Harbour in 1963, St. Anne’s experienced an ever-increasing pace of growth. That, and the need for space for religion classes, encouraged the purchase of seven adjacent lots and the building of a new parish hall in 1966. Under Father Diamond’s watch, the parking lot expanded to 60 spaces. The Diocese of Orange was established in 1976, with William Johnson its first Bishop.

When Monsignor Michael Collins arrived at St. Anne’s in 1980, he emphasized religious education and assigned Sister Sam Settar to the new program.

In 1987, he sponsored the start of the Knights of Columbus at St. Anne’s. Well known around town, Monsignor Collins captured the hearts of the Seal Beach community and the parish.

He retired in 1987, but stayed on in retirement to assist the subsequent two pastors, Father Patrick Doherty (1987-1993) and Father Robert Vidal, who arrived in 1993.

“Father Bob,” as he is fondly known, always cared deeply for his growing flock. During his stewardship, he implemented the Rite of Christian Initiation of Adults program, increased the community involvement of the Knights of Columbus, and started a new Woman’s Guild. His was the longest service of all the parish priests, and still leaves a deep spiritual and temporal mark on St. Anne’s.

In 2011, Monsignor Michael Heher was appointed by Bishop Tod Brown as the 17th pastor of St. Anne’s, where he fosters the spiritual, pastoral, and working operations of the parish. Father Bob continues to be of service to the church as Pastor Emeritus. To assist Monsignor Mike to meet the growing needs of St. Anne’s, the first Parochial Vicar and newly ordained, Father Duy Le was assigned to the church in July 2011.

With his retirement on Dec. 31, 2021, Monsignor Mike will complete the tenure of 17 pastors during 100 years. The parish has grown to 830 registered parishioners and continues to play a vital role in the Seal Beach community.