Four proposals were spelled out in the staff report, which was prepared by Community Development Director Les Johnson:

• Temporarily allow outdoor dining on public sidewalks in the Main Street area as well on private property next to restaurants.

• Establish a $30,000 (maximum) campaign to market and promote the reopening of  Seal Beach businesses.

• Direct Finance Director Kelly Telford to include $140,000 for supporting businesses in the proposed 2020-21 budget. (For an update on last week’s budget workshop, see page 8)

District One Councilman Joe Kalmick, who had requested the agenda item, said he would favor going forward with the plan. Kalmick said it was going to be problematic for restaurants to operate with limited capacity and 100% overhead.

District Three Councilman Michael Varipapa speculated that the outdoor dining would be a dynamic process.

Johnson said the city would watch closely and report back to the council on a regular basis.

According to Johnson, table locations would be looked at on a case-by-case basis.

According to Johnson’s report, the municipal code doesn’t allow dining on public rights of way. (Anyone walking on Main Street recently would observe tables outside some businesses.)

“Greater flexibility in temporary outdoor dining accommodations would be appropriate while indoor dining areas are limited due to the COVID-19 pandemic,” according to Johnson’s report.

“Use of private and public sidewalk areas should be considered where sidewalks are wide enough to provide safe pedestrian and accessibility access,” according to Johnson’s report.

Staff proposed creating a temporary permit for sidewalk dining. The staff report said the granting of such permits should conclude a maximum of 30 days after indoor restaurant dining occupancy restrictions are lifted.

“Staff has identified locations in one of the Electric Avenue parking lots and a portion of Eisenhower Park that could accommodate this temporary dining area use,” according to Johnson’s report.

“The City would need to provide tables, chairs, additional trash receptacles, and sanitizing stations. It is anticipated that the highest demand time for these areas would be weekday evenings and mid-afternoon into the evening hours on the weekends,” according to Johnson’s report.

“A preliminary cost estimate has been prepared, representing a weekly expense of $11,000. Staff is recommending a budget amount that would allow for this activity to operate through August,” according to Johnson’s report.

A number of Southern California communities have recently been looking at using on-street parking for dining, according to the report.

“The City is currently in the process of revisiting the Main Street streetscape, including utilization of consultant assistance and a Steering Committee,” according to Johnson’s report. 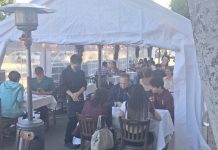