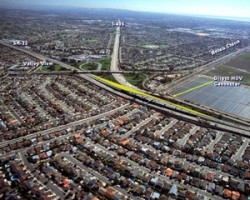 Just when people in west Orange County thought the idea of a toll road on the I-405 Freeway was a dead issue, it appears to have been resurrected.

According to Caltrans, which manages California’s highway system, and whose purpose is to improve mobility across the state, it is not without good reason.

Caltrans informed the Orange County Transportation Authority on Monday that out of the options for the Interstate 405 Improvement project, it is recommending the one that would add a toll lane along the freeway in each direction from the I-605 in Seal Beach to the SR-73 in Costa Mesa.

In addition, the option, known as Alternative 3, also adds a regular lane along the same stretch. According to OCTA, this stretch of the I-405 carries more than 370,000 cars a day and that number is expected to increase approximately 35 percent by 2040.

The news was a bitter pill for longtime opponents of the toll road, who see the future costs to use it as an unnecessary burden.

“It is very disappointing that Caltrans has come out against the publicly preferred ‘No toll lanes’ option,” said Seal Beach Mayor Ellery Deaton. “After months of testimony and meetings it is clear that Seal Beach residents and businesses have asked to keep our freeways free. We are already taxed to build the road; we don’t want to be taxed again to drive on it.”

“You’ve got to love Sacramento bureaucrats.  Sacramento is asking you to invest in multiple bridge widenings and when that chore is completed after some five years, they will gladly take the new lane that was built and use it for a managed (toll) lane,” said Moorlach in a recent email Update to his constituents. “It’s like being back on the dairy.  Orange County is being told to milk the cows, and Caltrans will then come along and skim off the cream.  It’s about as offensive as it can get.  And by the e-mails and telephone calls that my office has received, my constituents are not amused.”

As the ultimate owner and operator of the state highway system, Caltrans has the final decision on the project alternative. In making its recommendation, Caltrans said the option provides long-term sustainable congestion relief by moving the most people per hour and offering trip reliability along one of the most heavily traveled stretches of freeway in the nation.

Caltrans also said it provides the best travel-time savings to those who utilize I-405, not only in the project area but also from throughout Orange County and the region.

Caltrans announcement came on the heels of a decade-long discussion of the issue.

There were other alternatives that it studied before choosing to go with the toll road option.

One would have added one general-purpose lane in each direction at a cost of $1.3 billion.

Another would have added two general-purpose lanes in each direction at a cost of $1.4 billion.

Alternative 3, which Caltrans is recommending, would add one general-purpose lane in each direction, and a high-occupancy toll lane that would combine with the existing carpool lane to create a two-lane Express Lanes facility at a cost of $1.7 billion.

However, the general-purpose lanes would be added to the freeway first with Measure M funding, while the toll lanes would be phased in, without the benefit of Measure M money, as was promised and built when other funding could be identified.

Meanwhile, the agencies responsible for keeping car traffic flowing in the area are watching the clock as the number of cars using the highway system mounts.

The final environmental document for the project is expected to be finished early next year.

Once that is in place, and considering the construction challenges of building one lane in each direction, officials say OCTA’s project would get under way in 2016 and be completed in 2020.

The recommendation will require Caltrans’ District 12 Director’s formal approval with the signing of the Final Environmental Document and Project Report in early 2015.

“Caltrans commends the hard work of the OCTA Board of Directors and CEO in conducting a comprehensive, robust evaluation of alternatives to improve I-405,” said Ryan Chamberlain, District 12 director.  “Alternative 3 meets Caltrans’ goal to address regional growth and provide long-term congestion relief in the face of limited opportunities for current and future freeway expansion.  It moves the most vehicles and people per hour, improves air quality, travel times, and provides trip reliability.  Caltrans’ priority is to provide a safe and sustainable regional transportation network that will enhance Orange County’s economy and livability.”