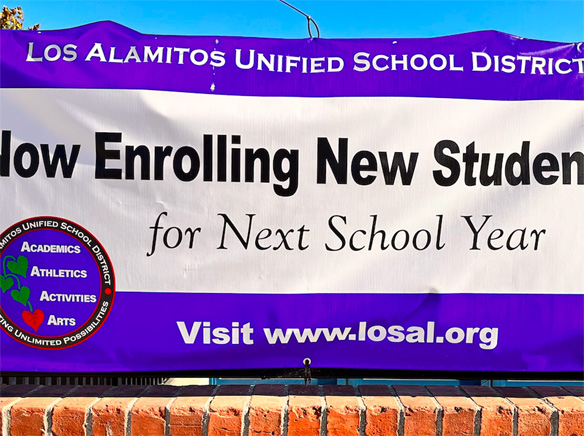 Fewer students are attending public schools in coastal counties. In Orange County, enrollment dropped by more than 45,000 students over the last twenty years. And while Covid-19 shut down schools and disrupted attendance starting in 2020, the trend of declining enrollment predates the pandemic.

Fewer students could mean less funding for public education. For example, the Long Beach Unified School District has had a 3% drop in student enrollment each of the past two years, reports The Long Beach Post, with each percentage drop translating to a loss of $7-$8 million.

For Inglewood Unified, declining enrollment led to the closure of an elementary school this year.

At the June 14 Los Alamitos Unified School District Board of Education workshop, board members and the public got a closer look at how this trend could impact the district’s nine schools. A consultant from the firm PowerSchool outlined two scenarios of what student enrollment may look like over the next ten years.

In a roughly 30-minute presentation, Ron Van Orden of PowerSchool explained the big-picture influences on enrollment.

“The overarching factor is there’s just fewer school-age children,” Van Orden said, explaining that less people are having children and the people who do are waiting longer to start families and having fewer kids.

He also said fewer people are migrating to California. He quoted the California Department of Finance’s prediction that there will be an 11% drop in the number of school-age children living in the state by the 2029-30 school year.

Van Orden said in addition to demographics, his predictions also factored in two residential housing developments in the area (The Los Alamitos Luxury Apartments and a project on Lampson Avenue), which could mean new families moving to the area, kindergarten and the expansion of Universal Transitional Kindergarten (UTK), inter-district transfers and the aging of grade cohorts through the system.

In his closing slide Van Orden showed which of the district’s nine campuses could see the biggest enrollment declines over the next ten years. According to the PowerSchool projections, Hopkinson Elementary in Rossmoor would see the biggest impact with a 31% drop in enrollment in ten years.  Hopkinson had 638 students according to its 2021 School Accountability Report Card.

McAuliffe Middle School could see a 17% decline in its student population in ten years, Los Alamitos Elementary could see a 16% drop over the same time period, and McGaugh Elementary was projected to see a 15% decrease, according to PowerSchool’s prediction.

At the workshop, Superintendent Andrew Pulver, Ed.D, said Rossmoor Elementary is the smallest school in the district. It had 541 students according to its 2021 School Accountability Report Card.

For example, the superintendent suggested creating boundaries for Weaver Elementary, which currently has no attendance boundaries, yet still allowing parents to basically be able to choose which school they would like their child to attend.

“It could help try to equalize the number of residents within each school to help all schools be successful or balance out the home attendance,” said Pulver.

Despite fewer students and the potential for less funding, California lawmakers have acted to help ease the potential budget impact of declining enrollment. In March we reported Los Alamitos USD was anticipating taking a big financial hit this upcoming school year due to a mix of issues with fewer students being one of them.

But in the budget deal struck between state lawmakers and Governor Gavin Newsom last month, schools got a big boost. Districts will have new flexibility in how they calculate their average daily attendance, which is what state funding is based on. They can use a school district’s current year, prior year, or the average of three prior years’ average daily attendance.

There’s also legislation and other action being debated to address the issue. In April, California Superintendent of Public Instruction Tony Thurmond announced a task force on declining enrollment. One bill Thurmond supports would help schools convert to dual language immersion programs “to steer families back to California schools.”

For more local education news, sign up for the Spotlight Schools email newsletter at SpotlightSchools.com.