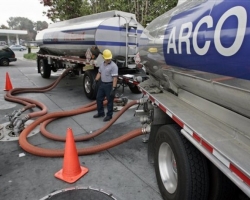 Company is “willing” to “dig and haul,” but ranks that alternative third in revised plan.

The revised corrective action plan for Seal Beach’s Bridgeport neighborhood recommends Electric Resistance Heating to decontaminate the soil and groundwater in the area near the ARCO gas station on Pacific Coast Highway.

The public has 30 days to comment on the revised plan.

“The technical analysis of the three alternatives results in the identification of Alternative 2, Electric Resistance Heating (ERH) as the preferred remedial alternative for the subject site,” Winsor wrote.

“However, despite the outcome of the technical analysis, Atlantic Richfield is prepared to implement either Alternative 2 (ERH) or Alternative 1 Excavation with Supplementary ERH following completion of local and state agency review and the public comment period,” Winsor wrote.

That statement may have been a response to the fact that Bridgeport residents, the Bridgeport Technical Advisory Committee, the Seal Beach City Council and the OC Health Care Agency have all called for excavation of contaminated soil—also known as “dig and haul”—to clean up the site.

The revised plan, like the draft, was prepared for ARCO/BP America by Stantec Consulting Corporation of Lakewood.

A discussion of the pros and cons of the “remedial alternatives” can be found on page 44 of the printed report or page 55 of the PDF version.

The report first looked at excavation, the one preferred by Bridgeport residents.

According to the report, the pros of “dig and haul” include the fact excavation is fast and certain.

“However, it does not necessarily achieve complete remediation and at this site would likely require supplemental remediation combined with long-term groundwater monitoring,” the report said.

Cons: “Excavation is difficult and may be impractical to implement for contamination under structures, near high risk utilities such as natural gas lines, pipelines, subsurface power lines, water lines, etc., and beneath public right-of-ways such as PCH and 5th Street,” the report said.

Other arguments against excavation mentioned in the revised plan were also mentioned in the draft plan: digging and hauling could disrupt local business, create noise, increase truck traffic and generate dust.

Later, on page 62 of the printed plan (page 70 of the PDF version), Stantec Consulting said that excavation would require a California Coastal Commission permit and compliance with the California Environmental Quality Act—both of which would delay the clean up process.

According to the report, in soil vapor extraction “a vacuum is applied through wells near the source of contamination in the soil.”

The vapors are then drawn to wells.

“Extracted vapor is then treated as necessary (commonly with carbon adsorption) before being released to the atmosphere.”

The report said soil vapor extraction has been used successfully at this site and said the treatment could take six months to two years under optimum conditions.

However, the report acknowledged a weakness of soil vapor extraction: “Concentration reductions greater than about 90 percent are difficult to achieve.”

The next alternative mentioned in the report is electrical resistance heating, also known as thermal remediation. “Thermal remediation is an in-situ technology that uses the introduction of heat to raise subsurface temperatures sufficiently high to volatize chemical contaminants out of the soil for vapor extraction,” the Stantec report said.

The technique has been used at 10 California clean-up sites, according to the report.

The advantages of electrical resistance heating include:

“ERH can typically achieve remedial objectives in approximately six to nine months. For this site six months or less of ERH system operation would be required,” the report said.

The report said ERH could achieve decontamination of more than 99 percent and was less disruptive to the community than other methods.

However, the Stantec report warned that the thermal treatment is more expensive than other decontamination treatments—and that it required a great deal of energy. “For this project the energy costs are estimated to range from approximately $500,000 to $1,000,000,” the report said.

Then, finally, there was dual phase extraction, which is sometimes called “bioslurping.”

The technology “uses pumps to remove various combinations of contaminated groundwater, separate-phase petroleum product, and hydrocarbon vapor from the subsurface.

Extracted liquids and vapor are treated and collected for disposal, or re-injected to the subsurface (where permissible under applicable state laws),” the report said.

The advantages include “proven performance over a wide range of conditions.”

The report said dual phase extraction was less disruptive than others—DPE could be used under buildings without digging.

Among the disadvantages: dual phase extraction could take three to seven years to clean up the Bridgeport site. DPE is also difficult to apply “where the water table fluctuates.”