The train is in the station—which is to say the living room of Jim Whiteaker’s home.

You can’t really ride on the train in Jimville. The tracks are HO size, the trains N30, according to Whiteaker. (HO trains are 1:87 scale; N scale trains are 1:160, according to the Railroad Model Craftsman website.) Santa and his reindeer fly high over the living room display. Close to the track nearest the Whiteaker door, you’ll find a “Santa” figure in a chair consulting with figures representing children in search of presents.

That said, the display is one tradition that couldn’t be derailed by the pandemic.

Whiteaker and his wife welcome visits to view the Christmas themed railroad display that fills his current living room from October to February. Their home is at 169 13th St., but the railroad display can be seen through the window facing Electric Avenue—which was once a right-of-way for a real railroad.

If you visit, the Whiteakers have extra masks for you to wear. In case you forget yours. (He took his mask off for a photo with his display, but the photographer stood about 6 feet away—and kept his own mask on,)

The display is a long-standing tradition in Whiteaker’s life. The “shop” with the “Jimville’s Nice Ice Inc.” sign on is 30 years old, Whiteaker said. The imaginary shop is named after a real-world ice business Whiteaker once owned.

Whiteaker and his niece (about two years his junior) came up with the layout. His niece works in graphic arts and knows about perspective and display.

He usually starts assembling it in October and takes it down in February.

He’s proud of the display. While he enjoys watching the trains run, he likes making the display the most. “It’s creative,” he said.

She once saw a wreath made out of branches and urged Whiteaker to buy it. They took it apart and made “trees” for Jimville.

The display has changed from one residence to another. Whiteaker pointed out that houses in Seal Beach tend to be smaller, which impacts the space available for the railroad scenery.

If this story seems familiar, it should. The Sun reported on Jimville last year. The 2019 display featured a skating rink. That rink “died” and was replaced by a hockey rink.

Last year, Whiteaker said it takes about 100 hours to put up the display. (The challenging part of the set-up is installing the lighting for each house and tree.)

The wiring and the display items have corresponding numbers so tearing down, packing, up and rebuilding the display next year won’t be too difficult unless he makes a radical change. 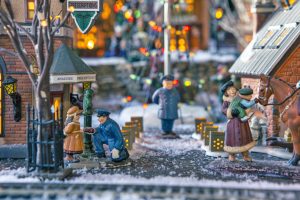 The skating rink isn’t the only new addition to Jimville. His daughter bought him a “bike shop” for his birthday. His family knows what he likes and they buy him buildings. Last year he paid more to buy houses from Department 56, but the houses he gets are more detailed.

About 30 trees and 100 people dot the “landscape,” which is covered with room temperature “snow.” He vacuums up the “snow” when the time comes to take down the display.