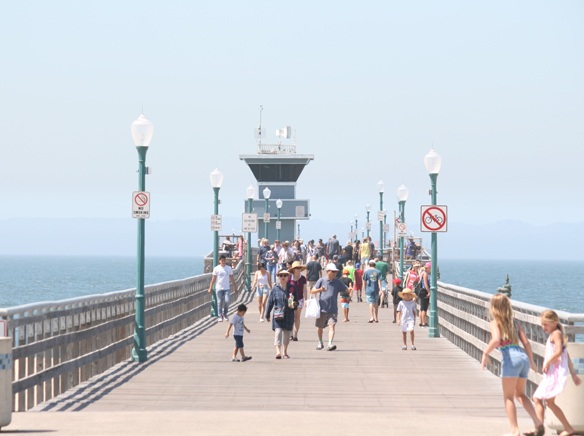 A restaurant appears to be the most popular use for the end of the Seal Beach Pier, according to responses to a crowdsourced opinion survey by the Sun News.

The second most popular use was for food trucks. Open space was the third most popular. A few individuals also called for the return of Ruby’s Diner, which the Sun counted separately from unspecified restaurants.

On two different social media platforms, the Sun recently asked the public “on the record and for possible publication in the print edition of the Sun, what would you like to see at the end of the pier? An open deck? A restaurant? Food trucks? Sidewalk vendor carts?”

Sidewalk (or street) vendor carts didn’t receive much support. The Sun counted seven comments for vendors and four against them. Another 17 comments suggested music.

Only one person specifically suggested restrooms at the end of the pier.

A few of the participants commented multiple times.

The numbers above reflect word and phrase searches in Microsoft Word to obtain the totals. Again, the figures are based on combined responses on two different platforms.

The combined comments on the two platforms totaled more than 9,700 words as of Monday, July 29. Space does not permit quoting all of the comments. The comments that are directly quoted below have been lightly edited for spelling and punctuation. Some comments have been paraphrased. Participants’ remarks have been grouped together by subject.

All ellipsis marks ( … ) found in direct quotations were written by the person being quoted.

Speaking in favor of restaurants, Angie Hanseth said, “A small diner that is family friendly, has outdoor seating and a ‘to-go’ window. An open deck leaves way too much room for more fish mess. And maybe I still miss Ruby’s …”

Ron Blaul said, “No food trucks or portable food vendors. The likelihood of trash carelessly or accidentally lost into the ocean is too high. We can hardly keep the beaches clean now. If you have any doubt about that being a problem, just look at the pictures right here about the trash all over the parking lot at Mothers Beach in LB. I have no problem with food trucks (in fact I like food trucks because of the variety and quality of food) but that isn’t the right location. I do support a restaurant or just leave it open.”

Three days later, he wrote, in part, “A point worth making … if it is not a client who leases the space and some agreement on sharing of the costs of construction/improvements then the city would have to pay. I don’t see any room in the budget for anything like that so once again it becomes a bond finance issue. My inclination is I’d rather leave it open than incur more debt but I’d want to see projections on revenue against costs.”

Fred Kirksey called for a restaurant with an open viewing deck.

Gardiner Mark called for a two-story restaurant, with fine dining upstairs and casual eating downstairs. He also suggested creating an amphitheater for concerts and events such as a farmer’s market.

Cynthia Mosqueda was among the pro-food truck supporters. “Maybe once a week, a different one every week! Food truck night. Heck, doesn’t even have to b(e) at the end of the pier!”

Cary Parton said, “Food trucks and or sidewalk vendor carts. The investment required for a fixed facility with basically 2 or 3 days a week with enough business to exceed break-even is not justifiable.”

Cathy Aguilar said, “Perhaps food trucks one or two times a week. Possibly during the day on weekends and evening during the week? Or some sort of small snack bar type business with hot dogs/hamburgers snacks, drinks. I think a full restaurant is impractical due to the walk required to get there.”

Mike Westmoreland said, “Food trucks would be great. Different ones at various intervals. Outdoor seating nearby would need to be created. I don’t think alcohol should be allowed.”

However, food trucks had detractors as well as supporters.

Shelly Bolander said, “No to food trucks. I would love to see either a nice family restaurant or an affordable seafood restaurant. Bicycle taxis would be a plus for folks that have walking difficulties.”

Tom Callinan said, in part, “Food trucks + wind = trash in the ocean. Bicycles on the boards = injuries (and) confrontations.”

Paraskevi June said, “No food trucks. Something slightly more than a concession stand with some umbrella tables and benches.”

Marc Moore said, “Every local pier has a restaurant. Vote out every city council incumbent until we get a restaurant.”

A.J. Wilson said, “An open deck. We don’t need to commercialize everything. Or introduce the potential for (any more) trash in the ocean.”

Greg Horne said, “I would prefer a restaurant or an open deck. Absolutely no food trucks or vendor carts. Either a permanent fixture to represent Seal Beach or open space for the residents and visitors.”

By the way, many advocates of open space mentioned benches.

Kris Schaffner said, “Open space (with shade would be nice).”

Laura Rogers said, “There are already plenty of wonderful restaurants in our quaint town. IMHO open deck with benches, sitting areas, and open space to enjoy the pier and ocean would be optimal.”

Leora Fellus said, in part, “Open space and occasional activity like telescopes or astronomy night. No fishing off end of pier would be greatly appreciated so we can all feel the wind and see the sunset unobstructed.”

Dan Buchner said, “The last thing we need is another restaurant or any vendors on the pier. Just keep it clean and add some comfortable seating so people can relax and enjoy the views from all vantage points on the pier.”

Francine DeFrance said, “Small businesses. Semi-permanent. No restaurant structure. Food trucks. Street vendors. Things that can come and go. And the rest—open space so we can continue to enjoy the breezes and the ocean view.”

Elizabeth Kane said, “Unobstructed view … maybe food carts … ability for people to get married out there! Wouldn’t that be lovely? Some benches to sit that do not get mucked up by the fishers which means better policing of fishing policy!”

Larry Hearn said, “Food carts (no trucks) and some benches. Would also like to have fishing encouraged on the entire pier but banned at the end space.”

Jeremy Simpson, apparently writing sarcastically, said, “How about a few more fishermen. [Sic] I don’t feel like they have taken every square inch yet.”

Alexey Novitsky said, “Nothing, but clean area with clean benches and enough trash cans and signs ‘no fish cutting,’ ‘no littering,’ ‘no smoking.’ So nice when there is nothing in front of your eyes, but panoramic ocean view. Any trucks or buildings will destroy this.”

Tysha Michel said, “I agree with Laura Rogers on no fishing allowed at the end of pier … some fisherman are sprawled out with so much junk and more than 2 poles each which is blocking people from walking around the deck. One guy cast the other day as I was walking by and I had to dodge the hook.”

Larry Holtzen said, “YES! A restaurant, patio and limited fishing, or none at all.”

Teri O’Keefe, who would prefer a restaurant on the pier, is no fan of fishing. O’Keefe said, in part, “I walk the pier most mornings and, unfortunately, the newly opened deck is already getting gross with the blood and guts left behind by the less considerate fishers who are out there every day. Love the idea of licensed pedi-cabs to take people back and forth … Of course, we could also bring back a bit of SB history, and have a small electric-powered tram!”

Rich Bluth said, “Before we worry about the end of the pier we should improve our 3rd world bathroom situation at the pier. It’s a disgrace!!”

Denny Booth called for making the pier a priority in the city budget.

“Not every city on the California coast has a pier, but Seal Beach is lucky enough to have one,” Booth said. “Piers make a city a destination. Unfortunately, our pier has no character, no sea legs, no fishing boat, no fresh lobster or crab, no dinner cruise. I would skip Seal Beach pier if I were traveling up and down the coast. A pier with a ‘ocean mystique’ about it definitely adds to the originality and the mystique of the shops on Main, which is why visitors buy stuff. I don’t see the ‘ocean mystique’ when I took my mom shopping on Main for cute clothing; neither did she and she purchased nothing. Such a disservice to the brave vendors on Main.”

Bars didn’t get much support, but Shaneen Tuley said, “(A) wine and tapas bar with mostly outdoor seating.”

Sean John McCarthy said, “How about a fun zone for the kids?”

Charan Deep Kaur said, “If it’s possible can the fence around the end of pier be more safe, i.e. with less space/gap in between the slats? … That day I was there and I saw a little kid was just playing there. Although his mom was really alert and careful but I was kinda really scared … just wanted to express what was in my mind. Having a restaurant there is also an amazing idea.” Arayf Snshne said, “Benches, food stalls, farmers markets; as much as I think a restaurant sounds fantastic, it is unrealistic. Why not use the space for many different things? How great would it be to have street performers or a string quartet?”

Daniel S. Johnson said, “A raised center platform, gazebo or bandstand with benches around … Would be great for live music or socializing. Multi use space. Maybe an ice cream and malt stand.”

Chase McCants Farrell said, “I’m going to throw something different out; what about a building that holds a museum, to show tourists our rich history, and ecosystem? The tourists would be looking out at the port of L A., and Surf City, and Catalina, along with the mouth of the San Gabriel- so much to show our traveling guests! There can be space for special events, and a small gift shop to sell local items, along with a small cafe, or local fair, wine tasting/cheese and oyster bar. Let’s really show our tourists why they need to return again and again! Plus, it will put a positive spin on those massive ships, and oil rigs occupying their view.”

Kelly Pelle said, “A large statue or fountain of a family of seals.”

Esteban Martinez said, “A diving board!”

Larry Kelly said, “Water slide and ladder to get back up.”

Raychel Delaney said, “Food trucks until the city gains enough funding to support building a rotating restaurant(pop ups new every month or so) and potentially a stage to have local talent perform at (music, magic, art, etc.) throughout the day.” 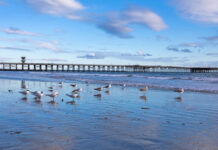