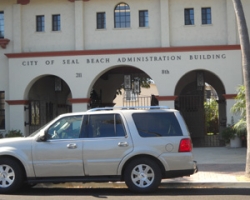 The council will consider hiring a recruiting firm to find a new permanent city manager in January.

Importuna retired in 2005. At the time, he was city manager of Cypress.

“The following week, I will take the steering wheel, so to speak.”

The Seal Beach City Council came to its decision during a closed session. Prior to the closed session, the council held a brief public workshop to discuss the city’s options in replacing Carmany, who has been hired to be Manhattan Beach city manager.

He said the city could appoint an interim city manager, appoint a current city employee as acting city manager, hire a recruiting firm, appoint two council members to serve as an ad-hoc search committee or defer action until January.

Barrow told the council that, over the years, Seal Beach had tried all of those options.

Barrow said that on one occasion, the mayor appointed a subcommittee instead of hiring a recruiting firm.

Barrow recommended against doing that. However, he did recommend creating a subcommittee along with hiring a recruiting firm.

Only one resident, Robert Goldberg of Seal Beach’s Bridgeport neighborhood, commented on the city’s options.

Goldberg thanked Carmany for his service and urged the council to look for someone as open to the public as Carmany had been for the past three-and-a-half years.

Goldberg advocated hiring an interim city manager, preferably one who had worked for Seal Beach in the recent past.

Goldberg proposed that the interim city manager work beside Carmany for at least one day.

In a handout to the council, Goldberg proposed hiring the same recruiting firm used by Manhattan Beach. That city went through a list of 90 candidates before hiring Carmany.

He also suggested that the new city manager be paid less money than he had been.

Goldberg argued that the new city manager’s starting salary should be limited to 5 percent above the chief of police’s salary.

He proposed that the contract eliminate the tie between the city manager’s compensation and the executive management contract so the city manager can negotiate with labor free of a conflict of interest.

Carmany hired Importuna about two-and-a-half years ago to serve as Seal Beach’s acting assistant city manager. Importuna said he held the position for about six months.

Importuna, who has a master’s degree in urban planning, said he has worked for eight cities in four counties and in two states. He has been a city manager in three cities.

He has worked with three Seal Beach city managers, including his Cypress successor John Bahorski.

Importuna was in Cypress from 2000 to 2005. During that time, the proposed development of a CostCo wholesale center and Cottonwood Christian Church’s development plans became a source of controversy.

Importuna called it a “big hullabaloo” that he said ended as a win-win for both Cottonwood and CostCo. Importuna said Cypress would now be in financial difficulty if the CostCo project had not been developed.