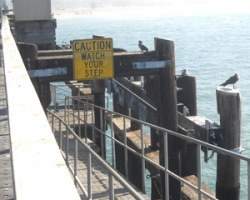 The council amended the agreement to have fee increases tied to the consumer price index.

DCOR, LLC, is an oil and gas company. DCOR boats make regularly scheduled stops at the landing on the Seal Beach Pier.

The lease agreement was originally part of the Consent Calendar, but was removed for separate discussion at the request of council members Ellery Deaton, of District 1, and Gary Miller, of District 4.

Seal Beach activist Robert Goldberg said the agreement was a good deal for the city, but was concerned that the city was agreeing to increase fees by a fixed rate of 3 percent a year. Goldberg said he didn’t see a need to change to a fixed rate rather than a rate based on the CPI.

Deaton said that, like Goldberg, she was concerned about the 3 percent annual fee increase.

Crumby said that for the past five years the CPI had increased at 2.1 percent.

Deaton said she was concerned that the United States could enter an inflationary period.

Councilman Miller was also concerned about inflation as the country gets out of the recession.

Miller asked if staff had surveyed other agencies to find out what they charged. He said the city should know if it was getting a good deal. Miller said he would prefer a three-year contract and said he would not vote for the lease extension without the CPI.

Fee increases were not the only concern of council members.

“I think we need to ask them about air pollution from their boats,” Deaton said.

Miller wanted operational guidelines for the DCOR boats. Miller said the pier shakes when boats dock at the landing area.

He said he had seen people jump off and on boats.

He was concerned that this was not safe.

Director of Public Works Sean Crumby, who presented the staff report to the council, said DCOR would be responsible for maintaining the boat launch. Crumby said there were no operational guidelines for the boats.

Councilman Gordon Shanks suggested changing the fee increase from the flat 3 percent rate to a rate based on the consumer price index.

Miller suggested the council not adopt the section of the resolution concerning the interest rate of monthly fee increases.