The Port of Long Beach’s clean-air efforts are achieving dramatic across-the-board reductions in air pollution, including a 72 percent decline in diesel particulates, according to the latest comprehensive study.

The air quality improvements mark the fourth straight year of significant pollution reductions from the ships, trucks, locomotives, forklifts, tugboats and other equipment that move cargo at the Port.

The Port-funded study showed that from 2005 to 2010, all of the key air pollutants from port-related sources were reduced. In addition to diesel particulates, sulfur oxides were cut by 73 percent, smog-forming nitrogen oxides lessened by 46 percent and greenhouse gases reduced by 18 percent.

The improvements occurred during a period when cargo volume declined, however cargo volumes were only down by 7 percent, and therefore only account for a small portion of the pollution reductions.

The study’s results were reviewed by the Environmental Protection Agency, the California Air Resources Board and the South Coast Air Quality Management District.

“We’re seeing the benefits of the hard work by the Port and the entire goods movement industry to reduce air pollution and to be better neighbors to the community,” said Long Beach Board of Harbor Commissioners President Susan E. Anderson Wise. “And we’re not finished. We are continually exploring new practices and technologies to improve air quality in the harbor to benefit the entire region.”

Use of lower-sulfur, cleaner fuels by all waterfront equipment—but especially the ocean-going ships—and the continued phasing out of the oldest trucks were the primary factors contributing to the air quality improvements.

An expansion of the Green Flag Vessel Speed Reduction Program where most ships slow down to reduce air pollution within 40 miles of the Port, and continued changeover of yard equipment and the Pacific Harbor Line locomotive fleet, also contributed to air quality gains.

Each year the Port of Long Beach compiles an “Emissions Inventory,” which calculates the amount of pollution coming from all the ships, trucks, locomotives, harbor craft and yard equipment working at the Port, with the help of the terminal operators and other businesses.

Because the calculations are based on actual information about the equipment, fuel type, hours of operation and other contributing factors, they are a much more specific gauge of port-related emissions than regional air quality monitoring, which measures pollutant information from all regional sources.

The Emissions Inventory is conducted to monitor progress with implementing the San Pedro Bay Ports Clean Air Action Plan, which was adopted in 2006 and updated in 2010 by the Long Beach and Los Angeles harbor commissions.

The CAAP is a master strategy for reducing air pollution and emission-related health risks.

The plan contains measures to address every mobile source of air pollution stemming from goods movement in and around the ports.

The Port of Long Beach is a recognized industry leader in environmental stewardship worldwide.

The more than $150 billion in trade flowing through the Port of Long Beach each year creates more than 300,000 jobs in the Southern California region. 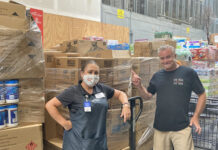