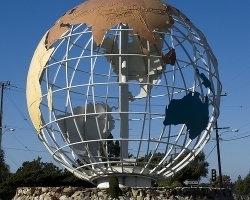 Representatives of Leisure World asked the City Council on Monday, Oct. 24, to have staff finish an application for federal grant money for an improvement project.

The request would have required 20-40 hours of staff time and a commitment of $2 million from the city. The deadline for filing the application was Oct. 31.

The representatives did not get what they wanted.

The council received and filed the request.

Mayor Michael Levitt said the council could not have voted on the proposal that night because it was not on the agenda.

Four of the council members expressed reluctance to commit city funds to a Leisure World project.

During phase two of the proposed project, the flood channel that runs down the center of Golden Rain Road in Leisure World would be covered.

At present, the flood channel is flanked on either side by surface roads. Cude said they did not have statistics on how often vehicles went through the fence and into the channel, but it happened many times a year.

Councilman Gary Miller asked Assistant City Attorney Steven Flower if there was a problem with the city investing money in a private property.

“There may be an issue there,” Flower said. He said he would have to review the grant program.

Cude said Westminster Avenue was a public street and that the channel belongs to Seal Beach.

Cude also said he believed that Seal Beach would have until 2013 to find the money for the project.

Miller said that as a result of the Oct. 12 killings, staff was behind schedule. “I don’t think there’s any staff time available, in my opinion,” Miller said.

He said there was only $5 million in discretionary money in city funds.

Councilman Gordon Shanks said the Golden Rain board should be at the meeting. He said the request was basically for the benefit of Leisure World. He said he had a difficult time with the proposal.

Levitt said he was not going to vote on the project for obvious reasons, but said the possibility of adding a south gate would help relieve traffic during the up-coming Seal Beach Boulevard bridge construction project.

Shanks, however, said the gate would probably not be completed by the time the Seal Beach Boulevard Bridge was done.

Assistant City Manager said that if the city moved forward with the project, the city would have to commit the funds.

Miller said it was the wrong time for the city.

Councilman David Sloan said the project had merit, but he was worried about the finances. Councilwoman Ellery Deaton asked Crumby if staff had 20 to 40 hours of staff time available.

Crumby said it would be difficult, but if that was what the council wanted the staff would find a way.

Deaton said the project should have been brought before the council during the city budget process. Deaton moved to receive and file the report.