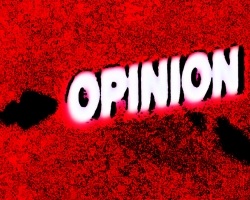 I have had an overwhelming sense of anger, but I couldn’t pin point the cause, until now.

After reading last week’s and this week’s paper I figured out that I am angry at humans. Including me, of course.

It doesn’t really matter to me how we got on this planet (we know as Earth), the fact is that we are here. It seems to me that before humans inhabited this planet, all the living beings who were here, lived harmoniously with their surroundings.

Then humans came along … somehow, some way, some time. When we showed up, we did not look around and figure out how we can live with Mother Nature.  Instead we developed it, civilized it, raped it and killed it. And it doesn’t look like there is an end to this mindless destruction.

So far as I know, we have not found another planet that humans can survive on. So why are humans methodically and knowingly destroying earth?

For money? Really? What good will money be if we are all dead, or wishing we were?

We need to get back to basics. We need to first stop what we are doing, then re-think our whole way of life and then lastly we need to consciously move forward with Mother Nature as our guide. If it’s not good for her, then we can’t do it.

I have an affirmation for all humans:

“Just because we can, doesn’t mean we should.” The articles in this paper that brought on this “A-ha moment” were: (1) The article about the property on 1st and Marina. I cannot believe that the humans who own this property are thinking of putting houses or a hotel there. Really? There should be no argument what that land should be used for. With the state that our Earth is in, every human with property should be encouraged and enforced to use the land for the good of the community/humanity and our earth.

Not for their own profits. That property should be used for solar panels or wind mills to provide electricity for Seal Beach residents and a community garden. Cities all over should be looking for ways to be self-sufficient and environmentally sound.

And (2) The coyote article in today’s paper just made me mad. Humans find a piece of land, which is in itself a whole ecosystem, and they level it. In effect, they are sending all the living beings on that land scrambling to look for a new home. Which, they cannot find because they are surrounded by more developments.

And humans have the audacity to say that the coyotes are on their property. I’m sorry, but the coyotes were here/there first. Who is on whose land? I guess now that the residents are fed up with the coyotes, we should kill them all—not. C’mon people, stop the insanity. All the animals on this planet were here before humans, or at least most of them. What gives us the right to take land, resources, and living beings and destroy them and their homes?? The answer is: We don’t.

From a concerned earthling.

Chani Demello is the founder of Moms on Boards in the Seal Beach area.