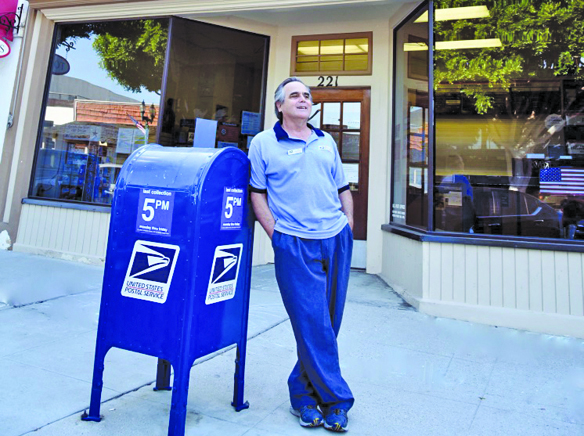 The long-time Old Town resident called it a career this week, but plans on a big, official retirement party when it safe for everyone to come.

Friends and customers who didn’t get the word before he stepped down will get a chance to say goodbye when he returns to the Mariner Station on Main Street Seal Beach from noon to 3 p.m., Tuesday, July 7. He said there would be a banner for the public to sign.

He’s leaving the station, but he’s not leaving town. He’ll concentrate on his artwork and help out his 34-year-old son, who recently bought a place in Long Beach.

Nardo has 38 years of “creditable service” in the U.S. Postal Service. If you include his time in the Navy—he repaired airplanes in Hawaii and never saw either combat or the deck of a vessel—he has 42 years of service.

Nardo actually stayed on about six months past than his creditable service. He had already earned the maximum retirement benefits he could receive.

“I’m pretty much overdue to retire,” he said.

Of his customers, Nardo said, “Some were idiots but most of them were pretty cool.”

He will not miss getting up early and having to work 10 hours a day.

“I really enjoy sleeping in, not having to go to work,” Nardo said.

He said he didn’t think he would miss the structure.

He said he liked working, but he wants to focus his energy on his artwork.

Nardo is considering getting a second home in a mountain area. Right now, he’s looking. But he plans for now to remain in Seal Beach. He’s been in Seal Beach years and it would be “hard to leave.”

He believes it is important to  keep your mind and body busy. He walks 3 miles a day.

Nardo said he was pretty busy before COVID.

He has no specific plans for his art, though he will be working on his studios.

Some of his newest works features parts that can be inter-changed or moved around. He calls it “moveable” art.

He’s trying to figure out how to make them faster.

Nardo is also a longshoreman. It’s challenging work. He’s been doing that since 2004. He said you have to be physically and mentally prepared for any job they give you. He described the work as sometimes pretty stressful.

He said that work has been slow, as less shipping is taking place in the face of the pandemic.

However, the work has changed. The most physical labor is lashing.

It is work he can return to if he wants to.

In his off time, his hobbies have included keeping a freshwater aquarium—which he might give away when his last remaining fish dies—and cooking.

“I’m Italian, so I love to cook a lot of Italian dishes,” Nardo said.

Nardo has been part of the Old Town scene for years. His booth has been a regular feature of the annual Arts & Crafts Faire. Some of his artwork hangs on the walls of the Sun office. He’s made frames and artworks using actual wood from the Seal Beach Pier. (A mixed media portrait of a stingray, using  pier decking to create the stingray and acrylic paints on canvass to portray the seascape behind the stingray, sells for $1,300.)

He didn’t want to share too many details with the public because he doesn’t want other artists to take his idea.

Nardo believes he can make good money with is art now.

He started in the Postal Service in 1982. He came to the Seal Beach Main Office on Westminster Avenue in 93. Since 2000, he has been in charge of the Main Street station.

He described it as “a good gig,” with no supervisors watching him at his little station.

That said, and acknowledging that COVID-19 is a bad thing, it won’t be much fun wearing masks.

Another advantage of working for the Postal Service is that it helped him be a single parent.

It would have been “hard to do that if I was just a starving artist.”