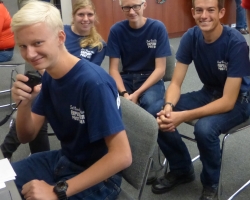 Joining amateur radio (ham) operators from all over the country, the local RACES group operated three transceivers covering nine ham radio bands.  Information was successfully exchanged with stations in various locations in the United States and Canada.  A successful information exchange takes place when both stations have been able to copy and record the number of radios that the other station is simultaneously operating, the class of operation, and the geographic location of the other station.

The program included a class on Communication Techniques taught by veteran RACES members Dick Crowe and Alan Ginsburg.  Participating in the class were several members of the West County Community Emergency Response Team,  members of the Seal Beach Police Explorers, and other members of the community.

During the exercise, Police Explorers successfully exchanged  information “over the air” with other stations while practicing the basics of amateur radio communication.

The Seal Beach/Los Al RACES group meets one evening every other month at the Seal Beach Police Department.  As part of their training, members participate in five to seven communications drills during the year.  For half an hour each week they also participate in an on the air radio check and information update session.