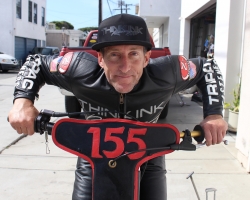 They say once you learn how to ride a bike you never forget. For local resident Mike Dalbey, the thrill of racing motorcycles is something he never wants to forget. 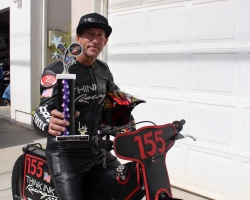 After being out of the game for about 20 years, Dalbey, now 48, got back into the racing world mix this year after he was approached by a relative.
“My cousin Tommy Thomas got me sponsored by Think Ink Racing,” said Dalbey.
Since getting sponsored, Dalbey has won numerous races, and was awarded a first place trophy in his first race back in January.
“I was ready to do some cartwheels because I was so jazzed,” said Dalbey about winning his first piece of hardware. 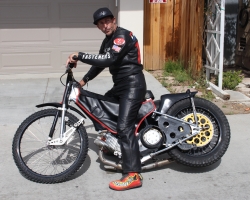 Now, Dalbey is gearing up for the 2015 Spring Classic & Milne Cup at the Costa Mesa Speedway on May 16.
Dalbey wants to win every race he’s in, especially at this weekend’s event, but his goal for the six-month racing season has a much larger scope.
“I want to become rookie of the year. That’s my goal,” said Dalbey.
With his sights set high and the feel for the racetrack coming back, Dalbey says his confidence grows with every race.
In his first race back he said it took about three practice laps to get adjusted to his new four-valve Jawa motorcycle that Think Ink purchased for him.
His sponsor also put up the money for his new leather racing suit.
And Dalbey has repaid them time and time again with successful performances.
At one of his races in March, Dalbey outperformed the competition and would’ve run away with the spoils if the results weren’t based off group performances. 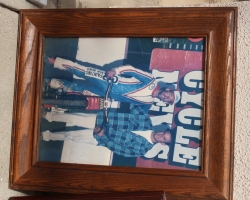 His will to win has fueled that success, but coming in first isn’t easy.
“It’s physically demanding because you are trying to hold the bike down,” he said.
“Like sometimes when you are turning a corner and bumping elbows, the front of the bike can come up and if you don’t hold it down you can go into the wall,” said Dalbey.
His awareness on the racetrack stems from his history in racing motorcycles.
Dalbey began racing back in ’86 after he attended the World Finals at Veterans Stadium in Long Beach.
“They were doing wheelies from one end to the other and I was like ‘whoa, I got to get into that,’” said Dalbey.
Six months later, Dalbey bought his first bike: a two-valve Jawa painted red, white and blue.
He raced all over southern California with that bike, including San Bernardino and the Ascott raceway in Gardena.
During that time, Dalbey said his racing skills began to excel naturally, which produced a lot of trophies.
He attributes the success early on to his mentality.
“Back in the day I had no fear. Back when you are young I don’t think you have any fear,” said Dalbey. 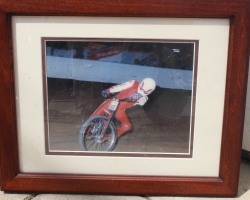 He learned what it took to win races, and that is something that lives on in him.
Though everything can’t be perfect overnight, this year’s racing journey is bringing back the natural instincts in Dalbey that have settled for years. He also said he races for his two kids: Ashlee and Cameron Dalbey.
“They are my pride and joy,” said Dalbey.
The road to becoming rookie of the year won’t be easy but Dalbey keeps a positive attitude and a smile on his face regardless of his performance.
“I just want to have fun and not get hurt,” said Dalbey.
To view a video of Dalbey in action visit: Dalbey Racing