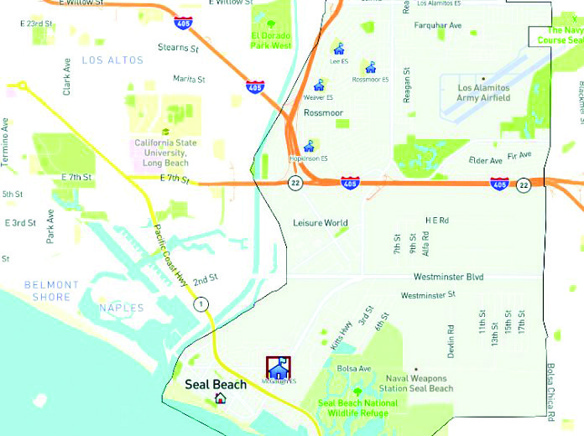 The Los Alamitos Unified School District has released five draft maps as it moves from an at-large voting system to one with five trustee voting areas. Starting in 2020, voters in the district will select one candidate from their area to represent them on the Board of Education rather than casting ballots for all five Board members.

LAUSD Superintendent Dr. Andrew Pulver characterized the draft maps as “conversation starters” meant to prompt discussion and provide input that will be used to create a different, final map that will be approved by the Board of Education sometime in January.

The maps, and process for approval, can be reviewed by visiting losal.org/voting.

Two more meetings will be held on the proposed maps. The next meeting is Tuesday, November 12 at 6:30 p.m. during the regularly scheduled Board of Education meeting in the District Office Board Room at 10293 Bloomfield Street. The second meeting is at the same time and place on December 10.

The draft maps divide up the school district into different configurations of five trustee voting areas. LAUSD has nine campuses spread across Seal Beach, Rossmoor and Los Alamitos. Federal and state law requires that each voting area has a similar population size of about 9,600 people.

About twenty people attended a meeting Tuesday afternoon at Leisure World to learn more about the maps. Leisure World is a private retirement community that doesn’t allow school-age children to live there. The area was exempted from voting on or paying for past LAUSD bond measures. The most recent school bond, the $97 million Measure G, was passed in November 2018. But Leisure World does have a significant population of registered voters and they do cast ballots for school board.

“We really care about all the children in Orange County,” one woman at the meeting said and noted that Leisure World residents have grandchildren in the district. No representative on the LAUSD Board of Education has a child currently enrolled at an LAUSD school.

Many meeting attendees voiced support for having Leisure World kept in one voting trustee area meaning they would have one representative on the Board.

“I think we’re better as a unified voice,” said Leisure World resident Kathy Moran. Only one of the draft maps has Leisure World kept together in one voting area while the others have it split up into two, three or four different voting areas. Leisure World is covered by two Seal Beach City Council districts.

But, as Levitt noted, the population of Leisure World isn’t quite enough to constitute its own LAUSD voting trustee area and would need to be grouped with at least some other area.

“What neighborhood should Leisure World be connected to?” Levitt asked attendees at Tuesday’s meeting.

After the meeting, Moran said she was grateful for the opportunity to speak out. “My wish may not be fulfilled but my voice will be heard,” she said.