This year, the Annual Seal Beach Christmas Parade is in its 41st year on Friday, Dec. 6. The theme, “Movies of the Season,” presents a unique opportunity for this year’s grand marshals—Greg and Kathy Fellers.

Greg and Kathy moved to Seal Beach in September 2008 after retiring from veterinary practice in Loomis, California, for 35 years. Kathy had already retired as an elementary school teacher and was teaching aerobics when they moved south. Both enjoy very active outdoor life and good health.

They also have an extraordinary connection to community service, primarily through First United Methodist Church of Seal Beach.

They joined and became active at First United Methodist Church of Seal Beach. Greg has served as Chair of Trustees and as lay leader.

Kathy has continued as Administrative Council secretary during the same 10 years.

Greg and Kathy both sing in the Chancel Choir and are ringers for the Bell Choir. Greg enjoyed starting the Men’s Thursday Fellowship Breakfast and now coordinates their “project” services to the church.

Kathy served as “Sunshine Card” sender, then secretary and, for the last seven years, president. Taking the UMW group to local conferences and inspiring training sessions continues to be a pleasure for the women of First United.

The Task Force encourages disaster preparedness of all 350 Conference churches and training of individuals and churches in disaster response ministry, both early response and rebuilding efforts, for local, regional, and international natural disaster events. During the last four years, he has chaired the communications sub-committee and helped revamp the website as well as coordinate the release of news articles.

Kathy felt privileged to be part of the work teams.

Greg organized work teams from the church monthly during the building of a four home project in the Washington neighborhood in LB this past year.

Kathy, too, learned a lot about “house building” during the monthly workdays. Back at the church facility, though, she enjoys helping to maintain the landscaping outside and the bulletin boards inside.

Also, as Birthday, Anniversary, and Encouragement card administrator, she keeps the church newsletter full of celebrations and prayer needs.

Greg and Kathy Fellers started helping out with Save Our Beach almost as soon as they moved into town.

They gradually got more and more involved over the years and now serve on the Board of Directors for Save Our Beach, with four monthly local clean-ups involving hundreds of volunteers.

They have helped revamp special clean-ups for schools, civic groups, and businesses from all over southern California.

Greg took up an avid interest in the homeless issue, specifically as it related to Old Town. Over time, he gradually became familiar with the providers and organizations involved.

He was instrumental in efforts to form the Seal Beach Homeless Coalition, currently made up of five churches, two service organizations, and the Homeless Liaison program of the Seal Beach Police Department working in a cooperative effort toward effective outreach and support.

Greg currently serves on the Seal Beach Police Foundation as an advocate for the ongoing homeless outreach efforts here in town.

Their family is a member of the Friends of the Library, and we enjoy participating in their summer reading program, the individual Lego building sessions, and exciting presenters.

As supporters of Friends of Seal Beach Arts, they enjoy promoting their increasing live cultural activities.

Kathy is a member of a branch of the Seal Beach Women’s Club entitled LOTE.

She enjoys photography and has been their historian for four years.

Greg said, “We give thanks every day for having stumbled into Seal Beach 15 years ago looking at possibilities for an active lifestyle close to the beach and a friendly community to support in our retirement.”

Greg and Kathy are blessed with the families of both sons (Cory and Brad) living close by and the opportunity to participate in activities with grandkids Kevin, 12; Chloe, 11; and Cami, 10, every week.

Kathy joins him in these activities but substitutes aerobics and jazzercise for running.

They wish everyone “a very merry Christmas and a happy New Year!”

Seth Eaker is the co-chair of the Seal Beach Christmas Parade and has been the executive producer of Christmas parades in Michigan, Florida and Tennessee.

Email your memories of the Seal Beach Christmas Parade to editor@sunnews.org. 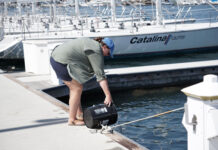