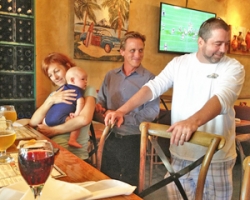 Following the success of its first year after opening the Hangout Restaurant and Beach Bar in Seal Beach, owners Aaron and Susan Kweskin, have opened a second restaurant, The Hangout Too in Huntington Beach.

Different location, same place, is their philosophy.  Fans of the Hangout across from the pier in Seal Beach, would be familiar with Hangout Too Southern Bar and Grill at 16446 Bolsa Chica Road, which officially opened its doors Aug. 19.

Where the Hangout boasts a full bar and dining area, Hangout Too does the same on a smaller scale, but features additional seating in an outdoor covered patio with seating at the bar. Every item on the menu is made fresh daily.  Meanwhile, the seafood on their menu is consistent with the Seafood Watch® list.

The Kewskins remain loyal to California vintners with house wines from ONEHOPE Wines.

ONEHOPE Wines donates half of its profits to an array of charitable causes, including Hope for the Warriors® to help provide job readiness services for returning troops and service members.

When The Kweskins came to Seal Beach to open a restaurant, they say they had no prior restaurant experience, but they did know what they would like to see on a menu on any given day.  And they understood how people like to be treated by way of customer service.

Their research included the lessons from those who had opened a similar business without previous restaurant experience and made it a success, Patty and Ron Sesler, the owners of Patty’s Place in Seal Beach.

Meanwhile, the Kweskins made their table tops, bar top, chairs, even the fabrication of the walls at the Hangout from reclaimed lumber or from barns in Nouth Carolina to the original decking of the Seal Beach Pier.